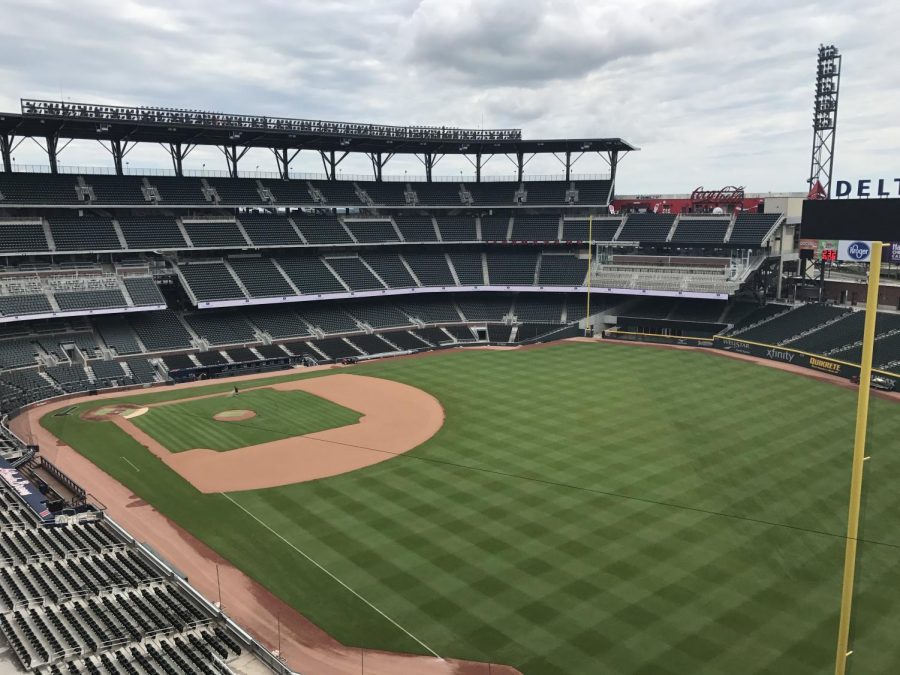 Truist Park home of the Atlanta Braves is one of the many stadiums across the country that sit empty thanks to fallout from the novel coronavirus.

The pre-game excitement, anticipated strategies, roaring and booing crowds, play-by-play commentary and high-fiving players is what watching sports competitions is all about. Like most of the world, I miss it very much.

Before COVID-19, March Madness was getting ready to go, Spring Training for Major League Baseball was nearing its end and teams and fans alike were gearing up for opening day. The regular seasons for the National Basketball Association and the National Hockey League were entering playoffs.. What a happy time to be a sports fan.

March Madness is the best college basketball to watch, even if you don’t watch the regular season games. I get excited every year because I like to fill out a bracket to predict the winner of the women’s tournament.

Oak Leaf staff writer Lauren Spates said, “I was especially disappointed to miss March Madness this year since my alma mater, the Maryland Terrapins, won the Big 10 men’s and women’s conferences. I felt really good about them winning the NCAA tourneys.”

College basketball is a way for Spates to stay connected to her friends from Maryland.

“We exchange clips, send articles and text during games. I missed that this year,” she said.

Sports allows families to stay connected; the love of a sports team is sometimes passed on through generations.

“Sports gives me something else to connect with my grandfather. He’s 94 and is a huge New York Yankees fan,” Spates said. Her grandfather hasn’t missed a Yankees game since World Wwar II.

“I was always sure to follow the Yanks and the American League so we’d have more to talk about. Without baseball season we’re missing that opportunity,” she said.

There’s nothing like an MLB Opening Day, followed by the entire baseball season. That was the case for Oak Leaf staff writer Nick Vides.

“I was looking for opening day for the Giants. I had already bought my tickets and was going to surprise my dad with his ticket,” he said.

Vides did not get his money refunded. He opted to keep the two tickets in hopes they will eventually be honored.

To me, baseball season is the best time of year. I’m a die-hard Giants fan, and I miss seeing my boys go to battle everyday. The thought of not attending a game at Oracle Park this season makes me sad. I miss eating the garlic fries and the sound of the ball  cracking off the bat. I was especially excited to see the return of outfielder Hunter Pence.

Watching baseball games at home are fun too because the Giants have the best broadcast team in the league with Mike Krukow, Duane Kuiper and Amy Gutierrez. They put a smile on my face and make me laugh.

The NBA playoffs were right around the corner when the season was halted, and although the Warriors were not contenders, basketball playoffs are still fun to watch.

“I miss the playoffs, because it’s around the time they’d be starting. The Warriors weren’t doing so hot, but my family would still watch the playoffs together, and it would be our pastime together,” said Oak Leaf staff writer Marilyn Santos.

For Santos it’s also weird not seeing shows like “Pardon the Interruption” or “Around the Horn” on ESPN.

The NHL season was also put on hold.

“Since there’s not going to be a Stanley Cup awarded this year, I’ve been playing lots of ‘NHL 20’ and watching my team win the season virtually,” said Oak Leaf co editor-in-chief James Domizio.

There are ways for sports fans to cope without watching it.

“I’m feeding my competitiveness with Zoom darts tournaments with my dad in New York and my cousin in Illinois,” Spates said. “We all have dart boards, we set up a camera on each board, then dial into Zoom and play cricket.”

As for me, I’m playing “NBA2K20” to help feed my competitiveness. I keep rewatching old games, such as Tim Linceum’s second no-hitter in 2014, the Giants 2014 NLCS series winning game, which still gives me goosebumps, Warriors games from 2015–2018, the 2016 Rio Olympics and even baseball games played before I was born.

“I do think that there will be pro games this summer. They might play an abbreviated season but I believe they will play,” said Santa Rosa Junior College baseball player Aidan Morris.

I hope sports will return soon, even without fans filling the stadiums and arenas. America needs sports right now to take their minds off the news, the depressing virus numbers, the lost lives, the plummeting economy. Sports allow people to focus on something positive, if even for a couple of hours at a time.