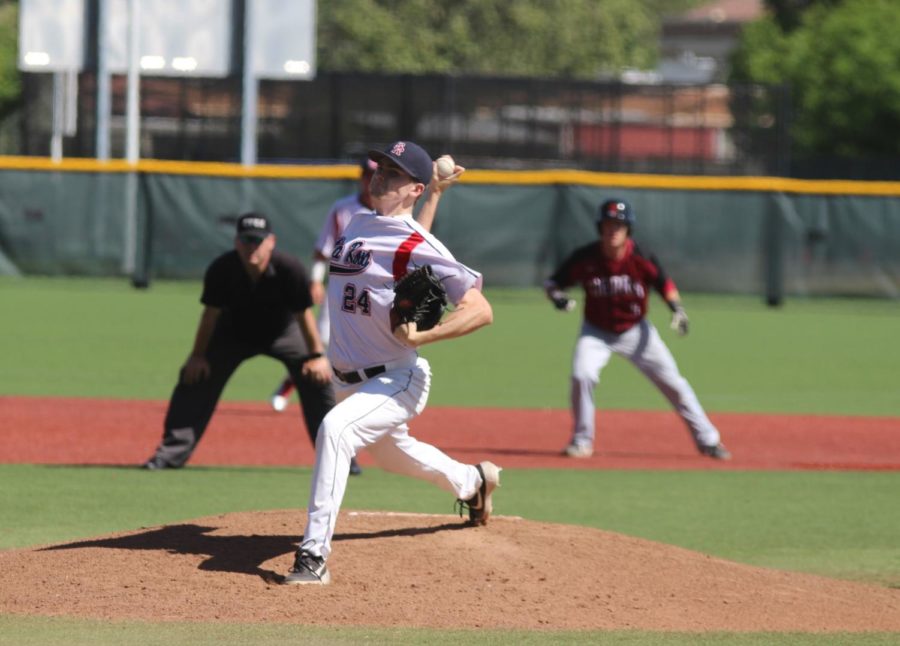 The Santa Rosa Junior College baseball team outlasted Sierra College by scoring five runs from the fifth to the seventh inning to secure a 6-3 win Thursday at Cook Sypher Field.

The first half of the game was low scoring with one run for the Bear Cubs in the bottom of the second, when their sophomore catcher Ethan Payne earned a walk with the bases loaded, and one run in the top of third for the Wolverines.

“The inside-fastball was working for me pretty well, I definitely got it in on their hands and that created weak contact [off of the bat],” O’Malley said. “They were hitting my curveball pretty well, so I just had to hang in there and beat them with the fastball.”

The offense came alive in the fifth with a double off the bat of sophomore Colin Prince that drove in designated hitter Logan Douglas from third and first baseman Aidan Morris from second for two RBI’s.

The Wolverines scored a second run in the sixth inning when a runner from third base scored during a sacrifice groundout that made shortened the Bear Cubs’ lead to 3-2.

Payne led off the sixth inning with a homerun that barely landed to the right of the left field foul pole increasing Santa Rosa’s lead to 4-2.

“I knew it was going to be close, there was a little bit of a breeze pushing [the ball] left, so I was thinking and hoping it was going to hold, and it did,” Payne said.

Right handed relief pitcher Jacob Marquez took over for O’Malley in the seventh inning and pitched a quick three outs that included a strikeout.

The inning began with Sierra’s pitcher nailing Morris with a pitch to advance him to first.

Morris then stole two bases after a passed ball went off of the catcher’s foot and rolled away towards the home dugout during Prince’s at bat on the first base side.

Pinch hitter Peter Torres then hit a double to send Morris home. After advancing to third from a balk by the pitcher, Torres then stole home on a wild pitch to build Santa Rosa’s lead to 6-2.

The Bear Cubs Closing pitcher Devin Kirby struck out every batter in a 3 up-3 down ninth inning to put the game to bed and Santa Rosa walked away with a 6-3 win.

“The guys here have really high baseball IQ, they’re thinking their way around the field all the time,” said Santa Rosa assistant coach Tom Francois. “Right now, I’d probably give them a B because of a lack of execution in some of these critical situations.”

The Bear Cubs start the playoffs on May 3.