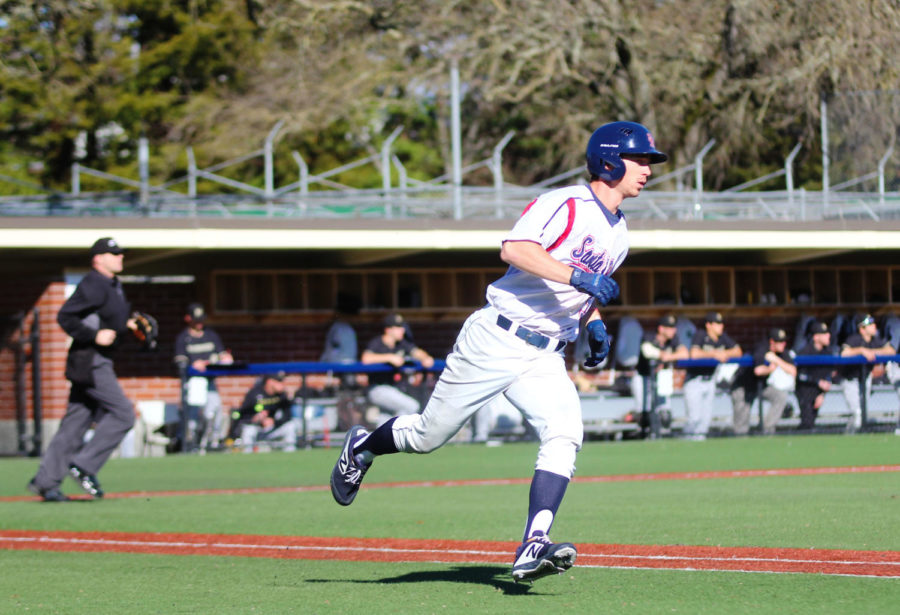 Outfielder Tayler Cullen sprinted to first base In the second inning of SRJC's 8-5 victory over College of Marin.

A big game from the Santa Rosa Junior College baseball team’s freshman outfielder led to a comfortable 8-5 win for the Bear Cubs over College of Marin on Tuesday afternoon at Cook Sypher Field.

Santa Rosa’s (3-1) Hayden Klemenok, young outfielder and leadoff hitter, contributed five RBIs, went 2 for 4 with a walk and sent his team ahead in the fourth inning with an impressive at bat.

“It’s always great having a team behind you, you know? Because they just give you confidence and you know that you can do it. I wouldn’t be able to play and compete if it weren’t for the boys,” Klemenok said.

Another standout for the Bear Cubs, who came into Tuesday on a three-game win streak,  was their left-handed starting pitcher Carson Snyder who commanded the mound for five innings and allowed only two runs in the pivotal third.

The Mariners (2-5) took the lead in the third inning by scoring two runs. However, the bats of the Bear Cubs came alive in the bottom of the third and fourth innings.

With Santa Rosa’s runners sophomore catcher Ethan Payne on second and sophomore midfielder Lawson Faria on first, Klemenok smacked a double that drove both baserunners into home plate in the third.

One inning later with the bases loaded, Klemenok, once again, cleared every runner with his second double.

By the end of the fourth, College of Marin was down three runs.

The Mariners fought back and tacked on another run in the fifth shortly before the Bear Cubs were able to extend their lead to 8-3 by the end of the sixth inning.

In the eighth, the Mariners mounted a two-run rally, but Santa Rosa’s relief pitcher Jacob Marquez snuffed out any chance of a comeback.

Pitcher Devin Kirby closed out the game in the ninth inning and sealed the victory for the Bear Cubs.

Santa Rosa’s next game is at 2 p.m. Thursday against Laney college in Oakland.