Rise and grind: The student-athlete hustle 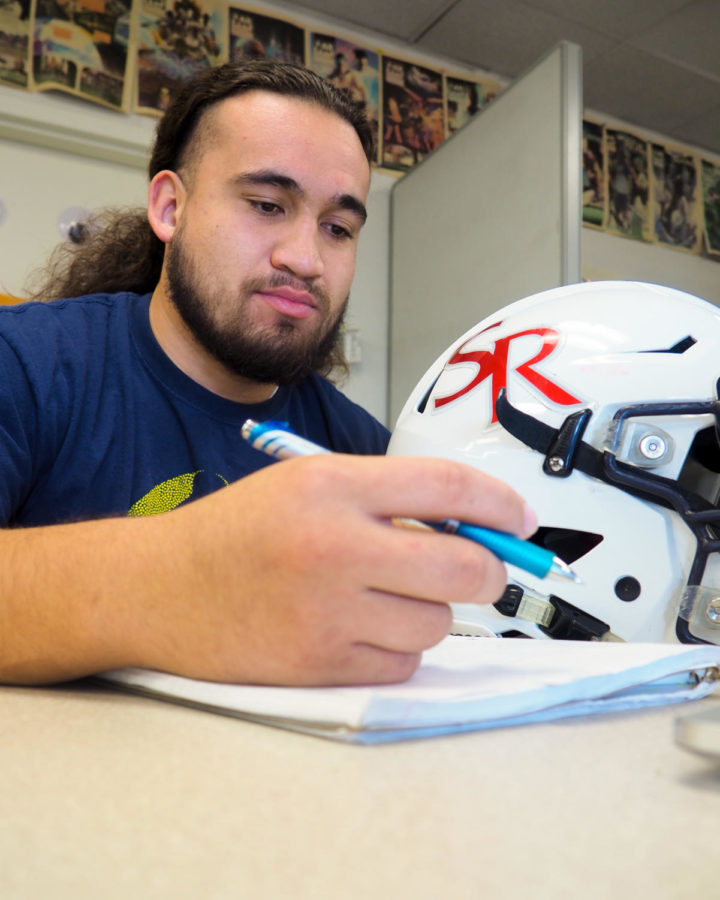 He wakes before the sun, muscles still sore from yesterday’s sprints, and steps out into 40-degree  weather to work out. Class follows right after, then team meetings, more classes, practice and another class after that.

The life of a student-athlete is nothing short of a 14-hour-a-day whirlwind. It is a daily exercise in discipline and pain and time management, and it requires the utmost commitment of both body and mind.

For students like Santa Rosa Junior College running back Kenneth Fitzgerald, 18, and center fielder Joey Loveless, 18, life as a student-athlete is brutal.

Many people understand the life of an average college student has enough challenges on its own. Full-time students taking 12 or more units know everything that comes with school — including homework and in-class work — is stressful enough.

Count the regular stress of the college life, then add the pressure and struggle that comes with collegiate sports, and you get a lifestyle that is fit only for the most determined person.

It is commonly thought that collegiate student-athletes receive special treatment from faculty for their association with school athletics. This may be true at large schools and Division I programs, but this is not the case for an athlete trying to make it to the next level from a community college.

Waking up at 5 a.m. is routine for Fitzgerald. Unfortunately, his day does not start with a hot cup of coffee and a casual scroll through Instagram. Instead, he wakes  crusty-eyed to a blaring phone alarm ordering him up for the football team’s morning session of mandatory weightlifting.

Most of the time Fitzgerald is coming off no more than five to six hours of sleep, either from doing homework or studying film for the upcoming game that week.

“There is no rest for the weary,” he said.

After starting his day with the horrific noise of Apple’s signature “alarm” ringtone, Fitzgerald grabs himself a banana for breakfast, his football gear for practice and his backpack full of playbooks and binders for class. He locks the door behind him and heads into the predawn darkness to drive from his house in Petaluma to the weight room in Santa Rosa.

Instead of starting his day with baseball-related activities, the center fielder wakes promptly at 7 a.m. for his 8 a.m. calculus class. Loveless gets a maximum of six hours of sleep the night before. His late bedtimes are due to never-ending math homework and weekly computer science projects he scarcely has the time for because of — you guessed it, baseball practice.

As their course loads indicate, Fitzgerald and Loveless aren’t only about sports.

Fitzgerald is a sociology major and Loveless is majoring in computer science; both have loaded schedules. This semester “Fitz,” as he’s known on the team, is taking 14 units and Loveless is taking 17, on top of their hours in their respective sports. The two competitors are fully aware of the burdens their schedules impose, but they recognize the term “student-athlete” leads with “student,” not “athlete.”

After Fitzgerald finishes his morning weights session around 8 a.m., he gets cleaned up and moves to the next event in his packed schedule, another class.

When class ends, he attends SRJC-mandated study hall in an attempt to get work done and make up for missed time spent in practice or team meetings.

Loveless is not exempt from these stipulations either. After his first class ends at 10:30 a.m. in Petaluma, he has 20 minutes to rush home, grab his baseball gear and books for the day and get to the Santa Rosa campus for study hall.

When study hall ends for both players, the cause for this scheduling crush creeps closer. For Fitzgerald, one more class stands between him and football time. For Loveless, it’s time to grind.

On Mondays and Wednesdays, Loveless rolls straight into the baseball team’s three-hour practice, immediately followed by weight training at 3:30 p.m. When he’s finally done with baseball for the day, at around 4:30 p.m., Loveless has one hour before his next class, Intro to Computer Science, which starts at 5:30 p.m.

Loveless usually rushes to the cafeteria between practice and class to grab something to eat, something to fuel him through the end of his day. But time is of the essence for student-athletes, and if a coach were to hear the slightest rumbling that a player slacked off in the classroom — or arrived late, dinner in-hand or not —  it’s over.

Athletes know tardiness to practice or a game warrants major punishment that can include 10 or 20 100-yard sprints from goal line to goal line.

“If you’re late to anything, you’re f*cked,” he said. “There’s no margin for error.”

On Tuesdays and Thursdays, Loveless has a 5 p.m. class back in Petaluma, and he somehow manages to make it on time. Meanwhile, Fitzgerald handles his own schedule just as gracefully.

After his morning study hall, “Fitz” makes his way to another class at 1:30 p.m. and finishes up two hours later. Then it’s time for his longest commitment of the day, football practice.

Team meetings start at 4 p.m., and as the coaches make very clear, there’s no time to spare.

Fitzgerald attends his team meeting and then the football team’s two-hour practice that ends at 6:30. But his day is nowhere near over. Like Loveless, Fitzgerald has another class directly after practice; then after class, both athletes head home for dinner and to start on homework due the next day.

Loveless says he is up until 2 a.m. some nights completing assignments, and the same goes for Fitzgerald with his studies.

Finally — mercifully — after a 21-hour day filled with sprints, calculus, batting practice and computer science, the two athletes get some rest, their alarms set so they can rise again tomorrow, rinsing and repeating their hectic schedules.

Balancing school and life is hard enough, but for student-athletes, it’s a whole different ball game. They manage school, work and personal schedules all while spending the majority of their time exerting their extraordinary energy on the field and in the classroom.

“You just have to know how to manage your time,” Fitzgerald said. “You have to use all your energy wisely throughout the day.”

And year after year, student-athletes like Loveless and Fitzgerald find a way to do it all.

All for love of the game.