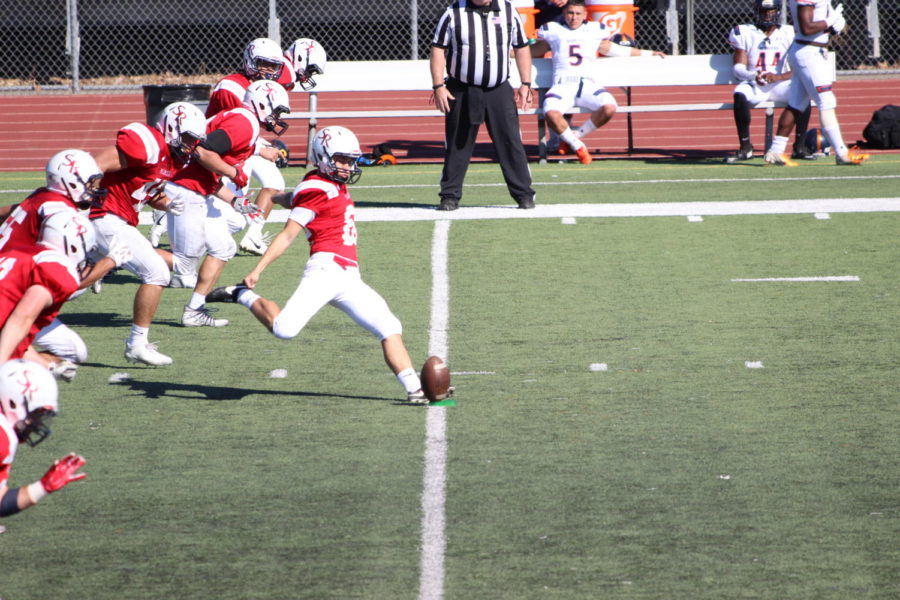 Santa Rosa Junior College’s football team celebrated its 100th anniversary homecoming game with a 37-13 victory over The College of the Sequoias Sept. 22.

The Bear Cubs’ homecoming win reflects the direction they expect to head in as a team, a far cry from last year’s start.

Two total wins and a six-game losing streak to open up the 2017 season can take a lot out of a team’s morale.

“I’ve been on an above .500 team almost every year in my coaching career. Last year was the anomaly,” said head coach Lenny Wagner.

This season has a different narrative for Wagner. SRJC moves to 3-1 after last season’s ‘anomaly’ and morale is riding at an all-time high.

“It feels great you know, coming off of last season. We had a rough start in the beginning. Now we’re coming out strong,” said second-year safety Richie Hardwick.

Two special teams touchdowns and a pick-six quickly propelled a one-score game into a blowout in the third quarter.

Second-year wide receiver Kalei Aukai took the opening kick of the second half down the home sideline 85 yards for an electric touchdown, firing up the home crowd and alumni present.  The exciting score from Aukai quickly extended the Cubs lead 20-7 seconds into the second half.

“I’m just happy that we made some plays on defense and special teams to kind of get the momentum going,” Wagner said.

The momentum continued in Santa Rosa’s favor after a mistake from the Giants’ special team unit. The punter received a bad snap over his head that he could not corral. Hardwick recovered the special teams’ fumble at the six-yard line and dove into the end zone for a quick touchdown. The #ScoopNScore resulted in his first career touchdown, vaulting SRJC to a 27-13 lead.

“We put a huge emphasis on special teams, as the head coach I run the special teams and we make it a priority, and it’s an attitude,” said Wagner. “It’s really having the guys that enjoy those types of plays, the guys that like to run down and make tackles. You gotta be a little reckless abandon to be good at special teams.”

Hardwick plays with that reckless abandon coach Wagner described. He collected seven total tackles on the day, and his fumble recovery may contribute to a free dinner.

“I have a little bet with one of my coaches about taking me out to dinner if I block five punts, so I have two already and going into it I was looking forward to blocking one,” Hardwick said.

On the first play of the immediate drive following the muffed punt,  second-year cornerback Allante Leapheart jumped a route in front of a Sequoias receiver and intercepted quarterback Ryan Johnson’s pass. He returned it 25 yards to the end zone, scoring the last of three touchdowns in the third quarter putting SRJC up big on Sequoias 34-13. The Detroit native has recorded an interception in back-to-back games and his first pick-six with Santa Rosa.

The Bear Cubs secondary lead by Leapheart locked down the Giants passing offense, limiting the receiver’s impact. Despite 10 players catching passes from Johnson, nobody finished with more than 62 yards.

Giants receivers caught a majority of their passes at, or behind the line of scrimmage. Santa Rosa’s defense easily stopped the constant screens and lateral plays by swarming to the ball in front of them and wrapping up.

A 75-yard snore fest composed of short rushing gains and incomplete passes was the most competent drive by Sequoias. Their bold strategy of running the ball on the first two downs and passing it if they met a third down longer than five yards was astonishingly successful as they worked themselves into the end zone off a touchdown pass.

On offense, the Bear Cubs came out of the gates fast and efficient. Quarterback Jake Simmons got the starting nod over the more experienced Kaylor Sullivan this week.

SRJC coaches want to roll with the quarterback playing the hottest, and Simmons may have played himself into being a full-time starter.

“Jake was the starter going into last week. So we just stuck with who was playing the best at the time. We’re blessed we have both guys…but right now Jake’s the guy and Kaylor’s the other guy,” Wagner said.

Simmons read his progressions quickly and smoothly delivered the ball to his open receivers. Simmons swiftly got the ball out of his hand and threw accurate darts all over the field. He finished the day with 297 yards, a 69 percent completion rate and a touchdown against zero turnovers- by far his best game of the season.

“We wanted to do a lot of quick stuff because they blitz a lot, and they did what we expected, so we prepared for it and were ready for it,” Simmons said. “Going into this game we knew they loved to play a lot of man defense, so we knew the middle of the field would be open and that’s what we tried to attack.”