SRJC enters playoffs with not much to build off 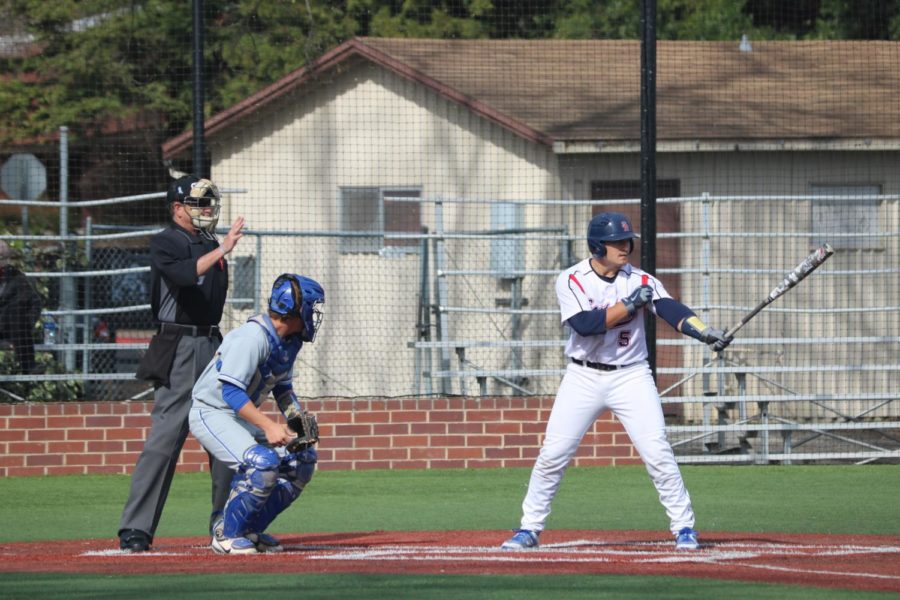 Catcher Cole Brodnansky is second on the team with five home runs.

The Santa Rosa Junior College Bear Cubs are advancing into the Norcal Regional Playoff Round for the fifth-straight year, despite losing four straight games, including a series sweep by Sierra College to close out the 2018 regular season.

“The general mood [of the team after the sweep] is a little varied, some people are down and some people have that edge,” Said team leader in starts (13) and strikeouts (58), pitcher Ryan Calderon. “It falls back on the older guys to really make sure we have the right mentality going into the playoff games.”

April was a rocky month for the Bear Cubs, as they did not post a record above .500. Their win-loss record for the 12 games played this month is 5-7.

“[Losing] doesn’t feel good but we move on and reset our focus onto the next game and prepare to go win a ball game,” said catcher Cole Brodnansky.

They lost back-to-back home games, including the home finale against Sierra. The Bear Cubs have been 12-8 in home games this season, but have lost six of the last 13 at Cook Sypher Field.

The Bear Cubs are ‘definitely’ using the outcome of the last series of the season as motivation against Mission, according to first baseman Joe Canepa.

“We got swept and walked off twice. If that doesn’t drive you to win, you shouldn’t be playing this sport,” Canepa said.

Sierra College was a stiff opponent to face. They are one of three community college baseball teams in California without  double digit losses(30-9). The team also boasts a high batting average, .319, and a strong ERA, 4.19. Sierra used their momentum of a four game winning streak going into the series against the Cubs to steamroll them.

Getting swept certainly had playoff implications for the seeding of the California Community College Athletic Association Norcal Regional Round. The Bear Cubs held a chance to gain ground over other schools by improving their record to have home field advantage as a lower seed in the playoff bracket.

CCCAA announced the Norcal Regional playoff bracket on their website Sunday and Santa Rosa was not awarded with home field advantage. No. 9 seed SRJC will play No. 8 seed Mission College away in Santa Clara.

The Bear Cubs have fared well this season playing on unfamiliar fields. They’ve recorded one win less in away games(11), than they have at home(12).

“We have to go in and make their field our yard, see how the field and the ballpark plays, learn from it and use it,” Brodnansky said.

SRJC(24-13) has a seemingly even match against opponent Mission College(25-14). They have similar records and similar statistics. Mission and SRJC also both lost their series to fellow playoff teams, No. 1 seed San Joaquin Delta(34-6) and No. 10 seed Folsom Lake College(25-15).

“We are preparing for another challenge this week; we know we are going to play a good team in Mission and we have been grinding this week both mentally and physically,”  Brodnansky said.

Mission College and SRJC have comparatively even stats as well. They have slightly better batting stats than SRJC on the season, but the Bear Cubs pitching leads by a large margin.

“We are going to have to come into games with a different edge and prepare differently if we want to win against good teams,” Calderon said.

The team has turned up the focus and intensity in practices leading up to the first game of the postseason. The coaches haven’t changed anything drastically in the team’s approach to practice drills besides instilling a winning attitude in the players.

“We’ve been sharpening up our mentality in these past couple days of practice,” said designated hitter Jo Bynum.

The Bear Cubs have entered elimination territory. In order to advance further in the playoffs and avoid an abrupt ending to the season, they must win their three game series against Mission. The Cubs have experience in that department, as they have won at least two games to take the three game series victory against Big 8 opponents on multiple occasions this season.

“It’s a new season. Everything is on the line because it’s win or go home,” Canepa said.

SRJC has made it to, and advanced past, the Regional Round every year since 2013. The previous two seasons culminated into State Title appearances. The 2016 team, led by Head Coach Damon Neidlinger, won a State Championship for the third time in SRJC’s history. Last year in 2017, Neidlinger’s squad came up short against Grossmont College.

“We just need to play our game, execute, do the little things well and I think we have a shot to win and advance,” Brodnansky said.

The road to Fresno and another State Championship for the SRJC Bear Cubs begins against Mission College at 2 p.m. May 4 in Santa Clara.