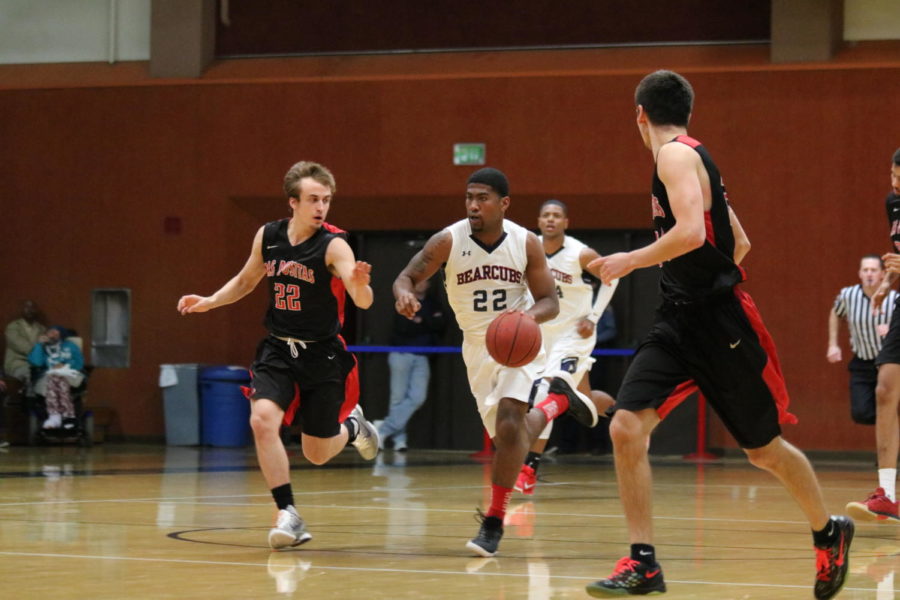 Second-year guard Jordan Graves runs the fast break early in the second half of SRJC's victory.

There was simply no stopping the Bear Cubs Saturday night, as they routed Las Positas College 81-58 in their first 2018 playoff game at Haehl Pavilion.

Both teams struggled to put up points early in the game, scoring a mere 10 points combined in the first seven minutes of play.

The Bear Cubs had to battle early adversity, as first-year guard and leading scorer Skylar Chavez was forced to sit with two early questionable foul calls. “I got two pretty tough calls, but I knew once I got back in there I had to do my part to help the team,” Chavez said.

The game plan changed because of Chavez’s foul trouble, according to head coach Craig McMillan. “Skylar bails us out sometimes offensively, so we had to move the ball a little bit more,” McMillan said.

Second-years Sadik Sufi and Jordan Graves stepped up with Chavez on the bench and scored the Bear Cubs’ first 15 points of the game.

As soon as Chavez re-entered the game midway through the first half, the Bear Cubs began to pour it on. Chavez hit three straight mid-range jumpers and never looked back, scoring 23 points along with three blocks on the defensive end.

SRJC took a 36-18 lead into halftime thanks to excellent rotation on defense. Las Positas ran their offense mostly through their big men, but the Bear Cubs countered that well throughout the game.

“We had to trap them with our guards, and they did a really good job rotating and making quick decisions,” said McMillan.

The Bear Cubs came out on fire in the second half, with Sufi and Chavez scoring the first 14 points. Sufi was a force all game long, scoring 18 points to go with six rebounds.

The Bear Cubs put the game out of reach early in the third quarter with a barrage of three pointers. First-year guard Trey Pugh hit back to back threes, then Graves capped off the run with a three to put SRJC up 61-35 midway through the second half. Graves hit four threes in the game en route to 16 points and 10 rebounds.

Graves attributes the team’s success to familiarity and strong locker room presence. “Our team chemistry comes from us being around each other all year,” Graves said. “We’ve got a great group of guys.”

The Bear Cubs are looking forward to their next matchup as they host Foothill College at 7 p.m. on Saturday, March 3 at Haehl Pavilion.

SRJC beat Foothill 73-56 early in the season, but Coach McMillan knows the playoffs are a different beast. “They’re a very disciplined team, so we have to come out and be ready to play,” McMillan said.