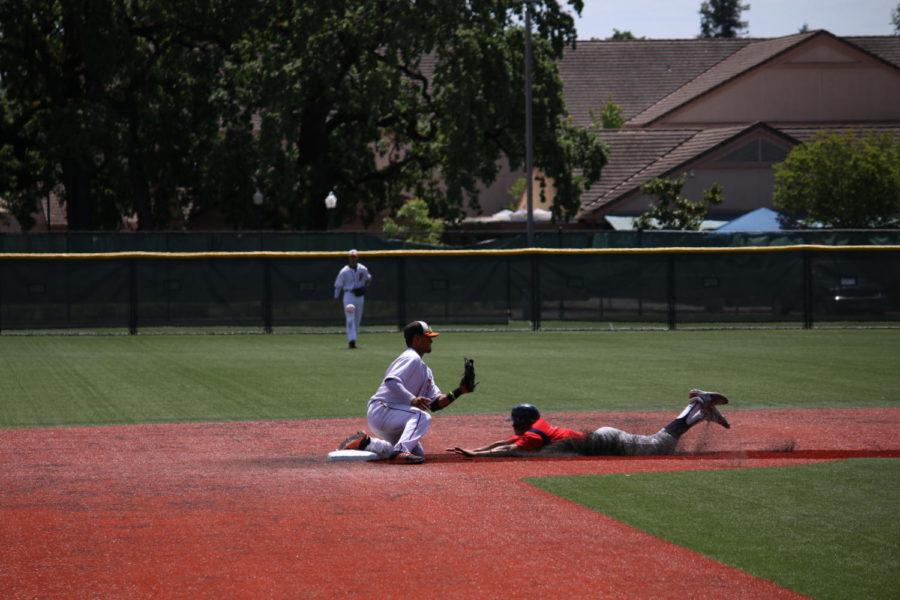 After rallying for two runs in the top of the ninth to take the lead, the Santa Rosa Junior College baseball team’s defense gave the game away in the bottom of the inning, losing Game 2 of the opening round of the California Community College playoffs 6-5 May 6 at Cook Sypher Field.

With one out and a runner on first base in a one run game in the bottom of the ninth, Reedley laid down what was supposed to be a sacrifice bunt. However, SRJC first baseman Ryder Kuhns didn’t catch the throw at first and the ball rolled to the fence. Confused on defense, multiple SRJC players went to cover third base leaving home plate uncovered. and the tying run advanced from first all the way to score. The batter ended up on third. The next batter drove home the winning run with a base hit to left center field.

“I mean [shoot], we’re two outs away from winning it, and you know, we just wet our pants,” said SRJC assistant coach Tom Francois. “It’s a composure thing. We lost composure.

SRJC catcher Trevor Mallett tied the game with his fourth home run of the season to start the ninth inning. Matt Yokota drove home Jeff Bart with two outs to give SRJC a 5-4 lead.

Reedley’s third baseman kept SRJC from scoring two runs in the top of the second with a great diving snag towards the third base line with two outs.

Hill got SRJC out of a jam in the bottom of the third. With runners on second and third and nobody out Hill struck out two batters and got a ground out to keep the game scoreless.

Reedley scored the first run of the game in the bottom of the fourth with a two out rally. Two batters reached with two outs via infield singles and one was driven home with a double down the line to make the score 1-0.

Mallett tied the game in the top of the fifth with a two-out RBI single to center scoring Daniel Teasley.

The bottom of the fifth started with a ground rule double for Reedley and that runner eventually scored on a passed ball to give them a 2-1 lead.

SRJC took the lead for the first time in the top of the sixth with a sac fly from Cole Brodnansky and a two-out RBI infield single from Jeff Bart.

Reedley took the lead again with a two out, two RBI triple in the bottom of the eighth.

“Luckily we get to play another one,’ Francois said. “But we should have won it right there.”