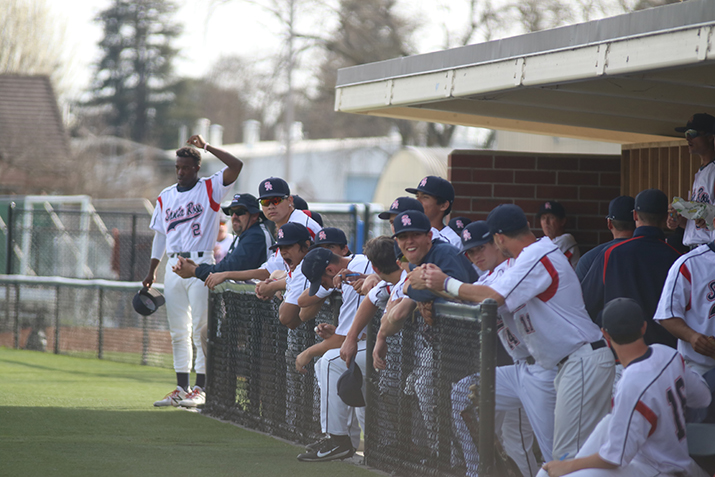 The Bear Cubs look on during their 13-8 victory over Reedley College on Cinco de Mayo.

Trailing 5-1 in the fourth, Reedley rallied with three straight two-out singles to trim the lead to 5-4. Then in the fifth, Reedley hit a solo home run to right field to tie the game.

“They hit the ball well,” said SRJC assistant coach Tom Francois. “Tomorrow is going to be another test.”

SRJC finally reclaimed the lead in the bottom of the seventh inning when Ryder Kuhns hit his first home run of the game, a solo shot to center field to lead off the inning. With two outs, Daniel Teasley drove home a run with a double, and Josh Lenney capped the inning with a grand slam to give the Bear Cubs an 11-5 lead.

After Reedley scored two in the eighth inning to make the score 11-7, Kuhns led off the bottom of the inning with his second home run of the game and his 13th of the season.

“I hit the weight room every day [this offseason],” Kuhns said. “I worked on everything. Legs are the most important thing though, because all the power comes from your legs.”

Ryan Calderon started the game for the Bear Cubs and allowed four runs in four innings. Evan Hill pitched the next 3.2 innings allowing three runs and striking out five. Jaren Noonan got the final four outs and allowed one run in the ninth.

SRJC looks to sweep the series at 11 a.m. May 6 at Cook Sypher Field. A decisive Game 3 will be played at 3 p.m. if necessary.