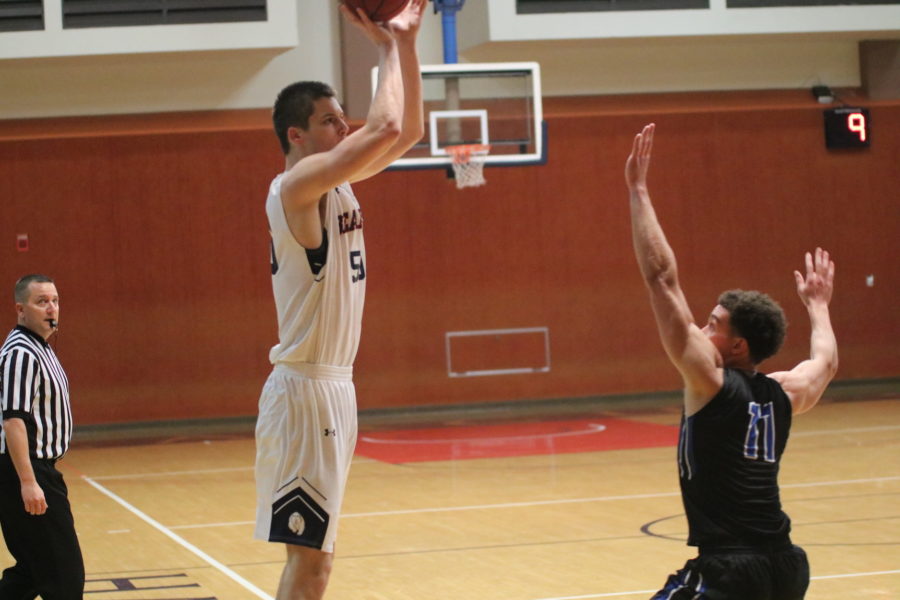 He’s a first-year student athlete who holds down the paint for Santa Rosa Junior College. Erik Poulsen has a love for basketball and a razor-sharp focus for the game.

Poulsen, 20, found his focus spring 2016 when he decided to get serious about basketball. He has a goal of playing at a Division I school and continuing to play professionally overseas.

Although originally from Santa Rosa, Poulsen started his high school career at Analy High School in Sebastopol, where he played JV basketball as a freshman and varsity as a sophomore. At the end of his sophomore year, Poulsen decided to change schools.

“It wasn’t the right culture of school for me. I felt like I didn’t fit in very well there. It was a tough decision but was a good one for my social development,” said Poulsen.

Poulsen transferred to Montgomery High School—closer to home in Santa Rosa—but was forced to sit out his junior year from varsity competition due to regulations. That didn’t stop Poulsen from working on his game.

“It was pretty tough because I would go to practice and then come game day I would just be on the bench and cheer my guys on,” Poulsen said. “I kind of wish I had a chance to play on that team. It was good for me to be a part of that group and make friends with those guys, and be a part of that team.”

After graduating high school in 2015, Poulsen found himself at SRJC with some aspiration to play ball, but after trying out, making the team and then quitting, Poulsen wasn’t sure what his next move was.

After trying out for the SRJC team in Fall 2016 and then choosing not to continue, Poulsen had to really find it within himself on whether he wanted to continue with his career in basketball. Spring 2016 was an important time in Poulsen’s life, as he dug deep within himself to focus on what matters.

“I didn’t think it would be good for my development, so I stopped playing, took some time off and tried to decide if playing basketball was something I was going to want to do for my whole college career—about two or three months after that, I decided that basketball was going to be a big part of my life,” Poulsen said.

Once Poulsen fully committed to the game of basketball, life began to change. He focused on getting stronger, putting on weight, and building a stronger foundation. Poulsen got in the habit of going to the gym six to seven days a week to become a tougher inside player.

“It was kind of a big problem for me my first year, getting positioned down low and the whole physical aspect of the game was a challenge for me,” Poulsen said. “Part of it is having a good mindset about it and being tough. You’re gonna get hit and pushed around, but that’s just part of the game… you have to bring a certain level of toughness down low and that’s something I’ve felt like I worked hard on, and its showing in the stats.”

Poulsen leads the state in defensive rebounds and finished the season top five in the Big 8 Conference in points per game, rebounds per game, free throw percentage, 3-point percentage and field goal percentage.

Being a student-athlete is tough. On top of all the pressure that comes with school, athletes need to stay focused and perform when game time comes. For Poulsen, who takes 15 units of general studies, finding a routine helps keep him on track and in focus.

“I try to take off Saturdays. Just take a day to take care of some errands and take some time to watch some college basketball and just chill,” Poulsen said. “The thing that is so key is seeing the things in your future and keep that in mind and just seeing the great opportunity for success.”

Seems like his routine is working just fine. As the regular season finishes and playoffs begin, Poulsen has about 10 schools scouting him, including University of San Francisco, University of Nevada Reno, University of Hawaii and UC Santa Barbara just to name a few.

With opportunities knocking, Poulsen is now facing a big decision about the best move for him and his development as a player. If the offer is right, Poulsen feels that it would be unwise to not take the opportunity and play three years of Division I basketball.

“We are just focused on the season right now. As soon as our season’s done, we’re going to sit down and talk and we’ll see what he wants to do. I’ll give him my advice in any way I can and make sure he’s making a good decision for him,” said SRJC Head Basketball Coach Craig McMillan.

During practice Poulsen continues to work on playing aggressive, becoming more consistent with his jump shot, post moves and his ball handling. Coach McMillan comments that Poulsen, although not very vocal, is a respected team leader through his work ethic.

“I didn’t know what to expect winning this year, and its kind of been a pleasant surprise,” Paulson said.

After coming off their loss in the playoffs against Oholone College, Poulsen’s season has come to an end and he will soon decide to either take off to a Division I school or play one more year at SRJC.