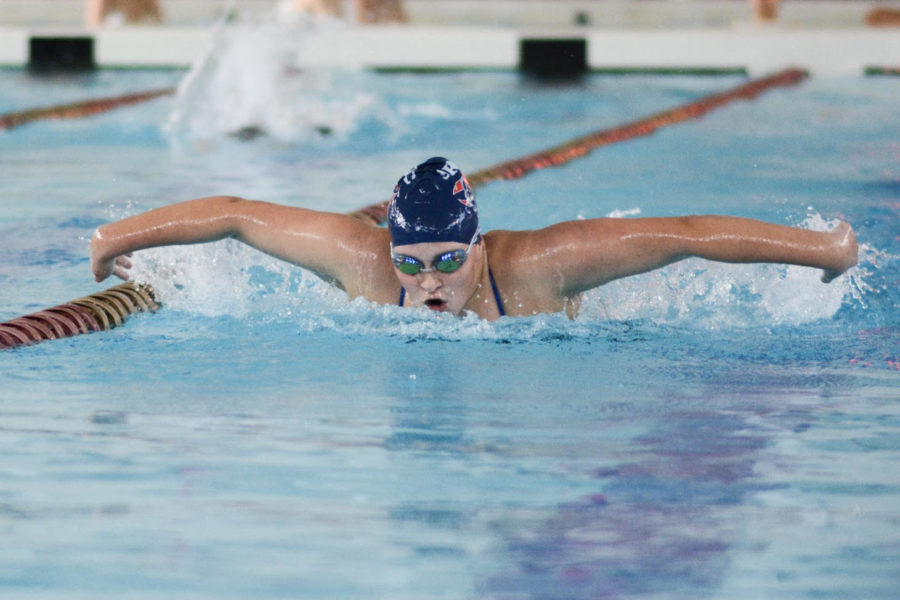 R.J. Williams whistled loudly, and with purpose. Everyone on the deck, and even the swimmers in the pool, could hear him. His team listened.

“Go go go!” Williams yelled during a race as he leaned closer to the water.

In a busy, raucous venue, Williams, a sophomore sprinter on the Santa Rosa Junior College Swim team, was impossible to ignore.

“What I was most excited about is there was a good vibe, and [the team] was behind the lanes cheering,” said head coach Jill McCormick.

But there were results, too.

The SRJC Men’s and Women’s swim teams traveled to Sacramento City College Feb. 24 for the Los Rios Invitational and kept their early season momentum. It was their first shot this season at individual races and they captured 10 first-place finishes, six for the women and four for the men. The women also won two relays and both teams enjoyed moments of domination.

In the first race of the day, the women’s 200 medley, Hailey Vance swam the backstroke, Lucia Mora the breaststroke, Jasmine Alger handled the butterfly and Taylor Sargis swam freestyle to cap the win.

Each went on to win individual races.

“It really helped pump everyone up,” Alger said. “Winning our first event got the adrenaline going.”

The men’s 200 medley team followed with a third-place finish, and set the table for its own success.

Drew Sipple earned the first individual win of the day for the Bear Cubs, besting the competition in the the 500 freestyle by a whopping 15 seconds.

“Drew was one of the top swimmers in the state last year, and he did a tremendous amount of work in the offseason,” McCormick said. “I think it’s starting to pay off.”

Williams took home first-place finishes in the 50 freestyle and 100 butterfly. His win in the butterfly was by just 0.12 seconds.

“R.J.’s a true sprinter; he’s a racehorse,” McCormick said. “He was figuring out a way to get his hand on the wall first, which is what a sprinter has got to figure out. The margin of error between first and fourth, or even first and eighth is less than a second.”

Sargis finished second in the women’s 50 freestyle, with just 0.47 seconds separating first through third place. Her 200 individual medley and 100 breaststroke wins were comfortable, however: She beat the competition by more than six seconds.

Mora won the 200 breaststroke, Alger the 200 butterfly and Vance took home victories in the 100 and 200 backstroke. All of their times were lightly contested.

“I think the team’s in a good place,” Vance said. “We all seem pretty pumped up right now.”

In tighter races, Bradley-John Erickson missed first in the 200 breaststroke by just 0.08 seconds, and Alger almost secured another butterfly win, but lost by a hand length.

The invitational finished with the 400 freestyle relay and the team of Sargis, Mora, Mary Lane and Vance won the women’s race easily. The men’s team of Williams, Erickson, Nate Parker and Sipple earned second place.

Both the swimmers and McCormick are ready for the next big meet, the Cuesta Invitational on March 10 at Cuesta College in San Luis Obispo.

“We have an alumni meet next week [March 3], but then we have our big midseason meet that we’re going to rest for, put on the [competitive swim] suits and everything,” McCormick said.

Williams is focused on qualifying for the state meet and is pointing directly at the Cuesta Invitational.

“Hopefully at that meet, we’ll have people qualifying for state,” Williams said. “I know we will. I know a good portion of the team is going to hit their goals and surpass them if anything.”

Even with early success, McCormick isn’t worried about keeping her team level-headed.

“I think [practice] gets easier now that we’re competing, because you have real results that you can’t talk your way in or out of,” McCormick said after the meet. “The clock doesn’t lie.”

Mora, as she boarded the team bus back to Santa Rosa, reflected on the invitational and looked to the challenges ahead.

“It’s only our first official real meet,” she said. “So I think we can only get better.”