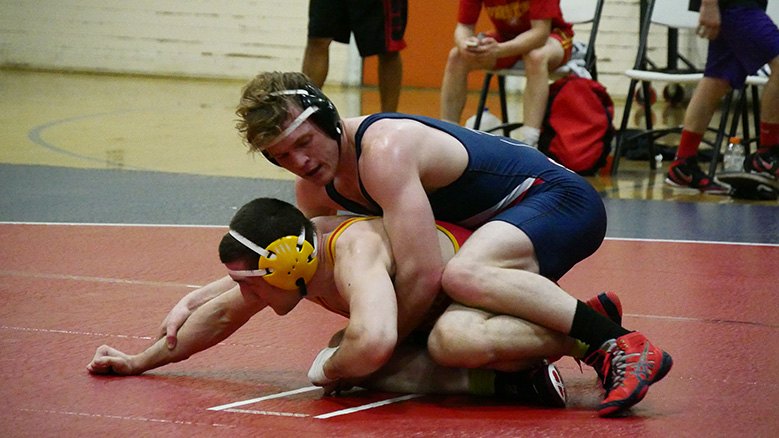 The Bear Cubs won their last home meet of the year on Nov. 9 against Skyline College.

It was sophomore night, Bear Cubs wrestlers Paris Henry and Colten Farley before the meet began.

A few Bear Cubs starters were out with injuries, but others won their matches.

After last week’s beat down by Chabot College, SRJC came back strong and ready to battle.

“The guys wrestled with a little more intensity this week,” said head coach Jake Fitzpatrick. “Its nice to have your last home game a win.”

Henry, who normally wrestles at 197 pounds, was bumped up to heavyweight. He defeated David Corona, who received honorable mention at the state level for heavyweights.

“I knew I had a disadvantage from the start, because I was wrestling at a weight class above my normal,” said Henry. “My opponent had a 60-pound weight advantage over me but I wasn’t going to let that get to me.”

Ricco Vasquez had a huge win for the Bear Cubs, picking up six points for his team. Vasquez lost early in his match against Hugo Plancarte, a well-rated wrestler, but ended up getting a reversal and a pin with twenty seconds left in the match.

“Vasquez’s win was the difference in the dual meet,” said Jake Fitzpatrick.  “It was a nine-point swing and we won by 6.”

The Bear Cubs’ Oscar Rios came back after being down early in his match. He defeated his opponent 7-4.

“I feel like I did pretty good,” Rios said. “Banging on heads is my wrestling style and I just keep focused on getting tougher each match.”

The wrestling team has a week off before the Coast Conference Tournament at Chabot College on Nov.19.

“I’m looking forward to the next two meets,” Rios said. “Chabot College has a lot of tough wrestlers, so I have to be ready to battle.”

The North Regional Championship is Dec. 3 at Lassen College. The top six at the meet will qualify for the California Community College Athletic Association State Championship Tournament on Dec. 9-10 in Victoria, CA.

Likely State qualifies include Garrett Heath (14-12), Joel Anguiano (15-5) and both Rios and Henry.

Blake Boswell who is recovering from a concussion will most likely be ready for state.