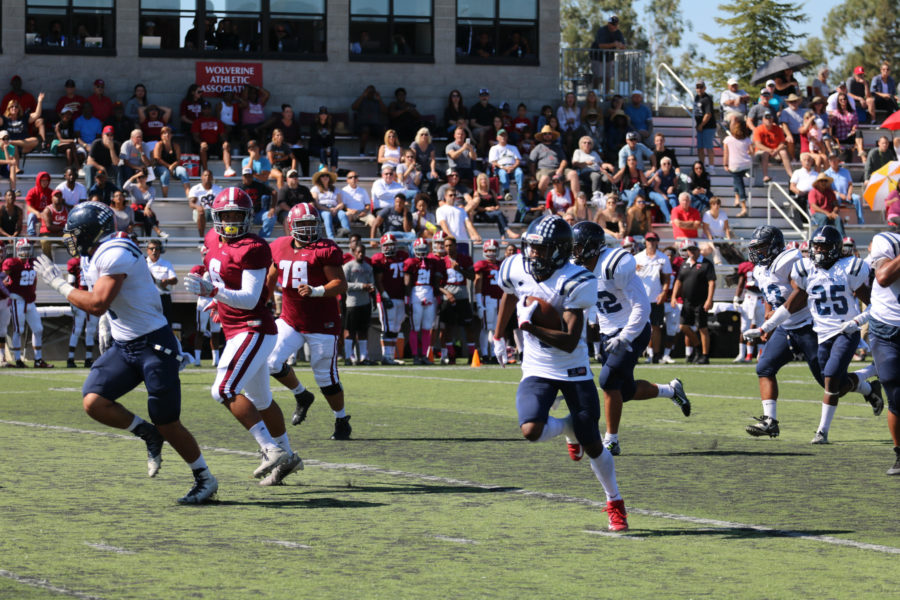 The Bear Cubs dominated all sides of the ball in their 44-0 win over Sierra College Oct. 1 in Rocklin, CA.

It was an easy win for the Bear Cubs (5-0) in their last non-conference game of the season, especially for the defense, who held Sierra (1-4) to only 161 yards of total offense, including only 82 yards passing.

The game started slow with neither team scoring for most of the first quarter. Sophomore defensive back Keith Benjamin intercepted a screen pass and returned it 47 yards for the game’s first touchdown late in the first quarter.

“I knew they were running a screen because the way one of the receivers ran down,” Benjamin said after the game. “Once he ran down I honestly saw money, I saw green, I knew I wasn’t going to drop that.”

That jump started the team and in the second quarter Santa Rosa Junior College went on a 20-point tear. The team scored on two passing touchdowns from sophomore quarterback Mitch Hood and a 20-yard touchdown run by sophomore running back Ja’Narrick James.

At halftime the Bear Cubs were up 27-0 and didn’t look back.

“We played well as a whole,” said sophomore defensive back Jaise Griffey.

“Offense showed up and defense got our first goose egg up on the board.”

SRJC’s offense had an impressive showing putting up 260 yards though the air and another 225 yards on the ground.

“Overall we played how we’re supposed to and just came down ready and prepared like always,” said freshman defensive lineman Andrew Floerke. “It’s a confidence thing, we prepared ourselves and know what we have to do and that’s we did.”

The Bear Cubs’ momentum rolled right into the second half and on their first drive they scored on Hood’s third touchdown pass of the day.

After that touchdown the team had a big enough lead and sat Hood, and gradually pulled the rest of the starters from the game. This gave SRJC a chance to let their backups see some playing time and they performed well.

“Sometimes you put backups in and you hold your breath, but our backups are solid,” said SRJC head coach Lenny Wagner. “It’s nice to see those guys get an opportunity to play and it’s just icing on the cake when they go in and they do big things.”

Freshman quarterback Tyler Okiyama replaced Hood for most of the third quarter and on his first drive scored on a 12-yard pass to wide receiver Ivan Hudson.

“Just like the [San Joaquin] Delta [College] game it’s good to see backups get in the game and then make plays,” Wagner said. “We played four quarterbacks today and we were able to put in our backup snappers, our backup kickers. Everybody got some playing time today and did things with it.”

SRJC is now 5-0 after the win. The team now has a bye week to prepare for its conference schedule.

“Oh yeah man, gotta get healthy and come into the conference strong,” Benjamin said. “We gotta protect ours, it’s our year for the taking.”

During the bye week the team will have a redshirt bowl which will be a game between all the practice players that are redshirting and greyshirting on Oct. 6.

“It’s real unorganized because guys have to play both ways because we don’t have enough for two full teams so it’s like playground football, but it’s fun,” Wagner said. “So we kind of end the week with that and have a good time and next week we start over again.”