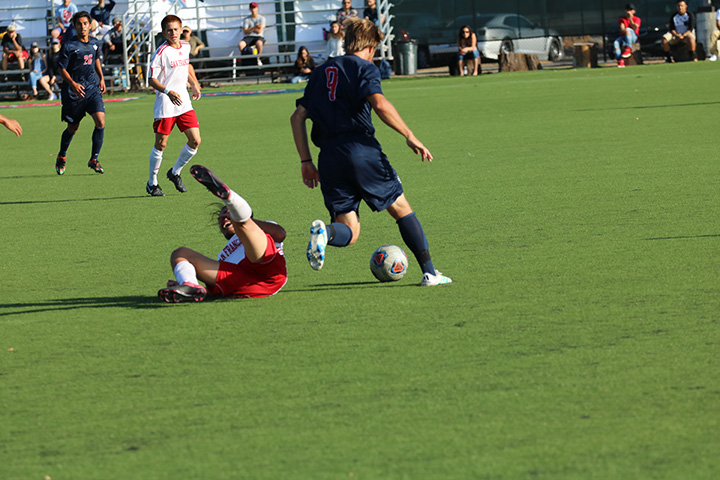 Dominic Laird fights off a would-be tackler and advances the ball up the pitch.

Wilson Briggs led the way for the Bear Cubs with a goal and an assist, while SRJC goalkeeper Oscar Hjern made five saves for his second clean sheet of the season.

The Bear Cubs hold a 5-0-1 record after the first six games of the season.

Head coach Marty Kinahan was happy with the results, especially against such a strong opponent.

“That’s usually a really tough game,” he said. “It shows we got a couple scorers this year.”

San Francisco controlled the offensive chances in the first half, outshooting SRJC by a 4-1 margin. But the Bear Cubs backend came up big, holding the Rams off the scoreboard despite the powerful attack.

The Bear Cubs began the second half with an aggressive attack on the Rams net, leading to plenty of early scoring chances. Briggs broke the scoreless tie in the 50th minute, although the goal would not come without controversy. San Francisco pleaded its case to the referees that an SRJC foul should’ve been called on the play, but the goal stood.

Just seven minutes later the Bear Cubs caught a major break. A shot from an SRJC attacker sailed wide past the San Francisco goalie, but a Rams defender accidentally knocked the ball into his own net. Briggs earned the assist on the own goal mishap.

Bear Cubs defender Dominiq Laird felt the win was a shape of things to come for the squad.

“We played well as a team,” he said. “We’re just coming together as a group and hopefully getting stronger and stronger each and every day.”

“We’re going to start scoring goals in the beginning, then it’s over, bottom line,” Richter said.

The Bear Cubs the second of a three-match home stand against De Anza College at 4 p.m. Sept. 20 at SRJC’s Cook Sypher Field.