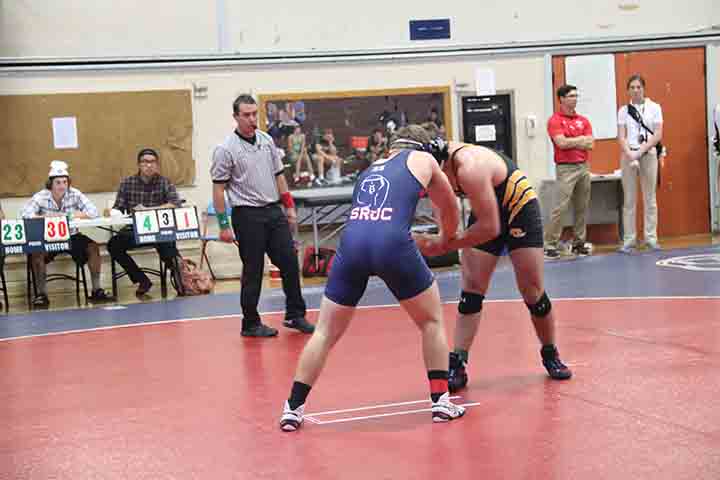 This year’s Santa Rosa Junior College wrestling team is off to a good start. Despite all the new faces and fresh challenges.

“This year is more inexperienced. It’s a younger team and [there are] less of them,” said Coach Jake Fitzpatrick.

The roster has the lowest number of wrestlers in years. Most of this year’s freshmen wrestlers come from Sonoma County, but there are a few from out of state.

“We stay local mostly. We get a little interest from outside the area and this year we’re fortunate enough to get a couple guys out of Spanish Springs, Reno,” Fitzpatrick said.

“They’re pretty young and we’re thin, but I think we have some quality guys,” he said.

On Sept. 2 the team held a scrimmage at Tauzer Gymnasium. Wrestlers had a chance to compete against each other before the real season begins.

“I feel really good about the team’s attitude coming into this season,” said sophomore wrestler Paris Henry. “Everybody’s working as hard as they can and nobody is slacking off. I’ve been able to improve my technique and work with better teammates this year.”

With all the positive attitudes, the team’s energy is high.

“I feel like we have a pretty tough team,” Henry said. “Just as long as we keep pushing each other, we’ll do well.”

Transitioning from high school sports to the junior college level has its differences.

“One of the things that has impressed me about this years wrestling team is the work ethic they have,” said first-year Brian Rivas. “It’s way different from high school. Everybody is focused and ready for the season.”

Working hard and staying healthy seems to be the main focus going into the season.

“This is a brutal sport on the body. Guys get dinged up pretty good,” Fitzpatrick said. “My heavyweight already sprained his ankle and is out five days. I’ve got two guys that have had some shoulder problems in the last couple of days. We already have injuries and we haven’t had our first competition yet.”

Having so much new talent will make for an interesting season.

“A lot of these guys were the best out of their high schools and now they’re just one of the guys,” Fitzpatrick said. “So all those big fish in their little ponds now are in a much bigger pond. So what were hoping is that they’ll step up and compete to be this big fish in this bigger pond.”

The wrestling team will compete on Sept. 17 at the KLS Air Express Invitational in Sacramento.