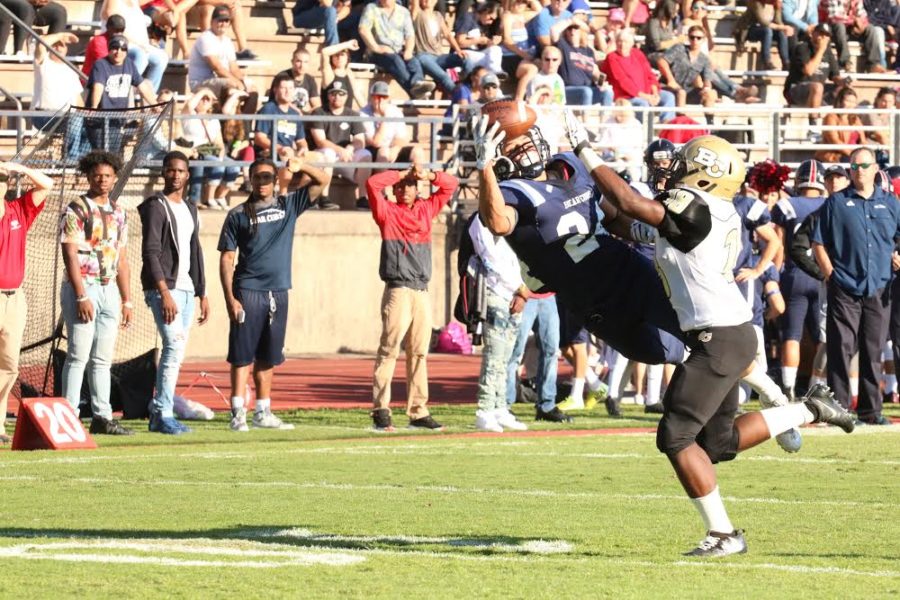 Linebacker Presley Piliati sealed the victory for Santa Rosa Junior College football by recovering a fumble and returning it for a touchdown at the end of the fourth quarter in its season opening 17-7 win against Butte College Sept. 3 at Bailey Field.

Overall SRJC’s offense struggled throughout the game, but their defense played strong and held Butte to 292 yards of total offense and one touchdown.

The biggest play of the game came late in the fourth quarter on a fourth-and-1 for Butte on their 20-yard line. Holding on to a 10-7 lead, defensive back Jaise Griffey forced a fumble which Piliati recovered and returned 22 yards for a touchdown.

“One of our goals was to score on defense and we did that,” said head coach Lenny Wagner. “Another goal we had was to win the turnover battle and I think we lost that one, but we were still able to come out with a win.”

The passing-game struggled in the first half and for most of the second. Starting quarterback Mitch Hood was 15-for-29 with 150 passing yards and three interceptions.

“I told them at halftime we need to tackle better and throw better,” Wagner said. “We missed a lot of open wide receivers in the first half.”

Hood was sacked three times, but was helped out by a consistent running game and a stellar defensive performance. Sophomore running back Jay Fergusson ran for 75 yards on 18 carries and running back Ja’Narrick James added 40 more yards on his six attempts. One of James’s attempts was a 30-yard carry.

“Our defense played phenomenal and our running backs really drove the ball,” said sophomore quarterback Mitch Hood. “As far as our passing attack, that one was all on me. It wasn’t as good as we’d hoped it would be, but we know what we need to improve on when we play Fresno.”

SRJC was happy to continue their success against Butte.

“This is the third time in a row we’ve beat them,” Wagner said. “It doesn’t happen very often from anybody.”

Although the passing game struggled, sophomore wide receiver Albert Beltran provided an impressive performance with six catches for 110 yards. One of his catches was a one-handed grab on a 28-yard completion that put SRJC on the oppositions 4-yard line.

“Going into this game I expected us to just win,” said Beltran. “But I did not expect to have such a big game. I just went in trying to do what I do.”

SRJC will now take the week to prepare for their next game at Fresno City College.

“As always there’s a lot of stuff we have to correct,” Wagner said. “We have to travel five-and-a-half hours to play Fresno next weekend. It’s going to be a challenge for our guys.”