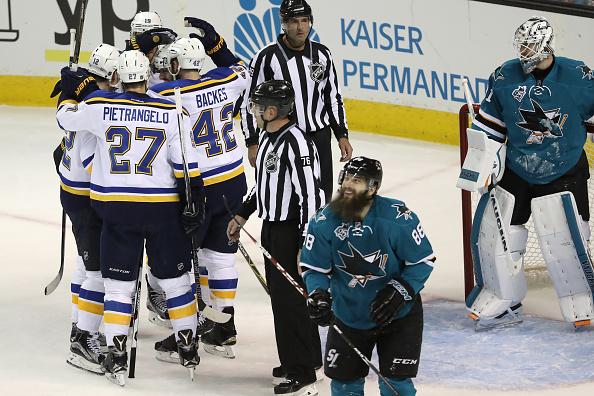 Jori Lehtera, #12 of the St. Louis Blues, celebrates with teammates after his goal against the San Jose Sharks in game four of the Western Conference Finals during the 2016 NHL Stanley Cup Playoffs at SAP Center on May 21 in San Jose, California.

After two straight listless performances, the St. Louis Blues’ offense exploded on the San Jose Sharks in Game 4 of the Western Conference Finals, scoring half a dozen goals en route to a 6-­3 victory. The Blues tied the best-­of-­seven series at two games apiece.

With Blues’ goalie Jake Allen, making his first start of the postseason, St. Louis got its first power play opportunity early in the first period when Sharks’ defensemen Brent Burns took a tripping penalty five minutes in. Playoff standout Robbie Fabbri and center Paul Stastny set up winger Troy Brouwer in the slot for the opening goal at 6:14 of the period. Brouwer’s goal marked the first goal for the Blues since the second period in Game 1.

Just four minutes later a Sharks’ miscue in their own zone led to the Blues stealing the puck and forcing Sharks’ goalie Martin Jones to scramble to make numerous saves before Blues’ forward Jori Lehtera poked in a rebound to make it 2­0 at the end of the first period.

After the Sharks played nearly unbeatable hockey in the last two games, the mistakes piled up throughout Game 4. During an early second period power play, the Sharks allowed a two-on-one to Blues’ forwards Jaden Schwartz and Kyle Brodziak. Schwartz faked a shot before passing to Brodziak, who rifled it far side over the blocker of Jones for a 3-0 lead.

Brodziak got his second goal of the period just four minutes later. More defensive zone mistakes by San Jose led to another turnover. Blues’ winger Dmitrij Jaskin made a perfect pass behind the net right out to Brodziak, whose shot ended up in the back of the net at 10:11 in the second period. The 4­0 goal ended the evening for Martin Jones, who after playing every minute in the playoffs for San Jose to that point, gave the net up to backup goalie James Reimer for the rest of the night.

The Sharks finally got on the board just over a minute into the third period. Sharks’ center Joe Thornton made a perfect pass into the crease for captain Joe Pavelski to tap in. The joy was short lived. Just three minutes later, Sharks’ right winger Joel Ward received a puck over glass penalty that turned into a goal for Brouwer.

With a 5­-1 score line and the Blues in firm control of the game, the last 15 minutes were merely a formality. Sharks’ center Chris Tierney found room on the far side past Allen to make the score 5-­2 at 6:57, but Blues’ defenseman Alex Pietrangelo slid the puck into the empty San Jose net with Reimer on the bench for the extra attacker at 15:39. Winger Melker Karlsson scored one last goal for the Sharks a minute later.

The two teams return to St. Louis for Game 5. The puck drops at 5 p.m. May 23 at the Scottrade Center.