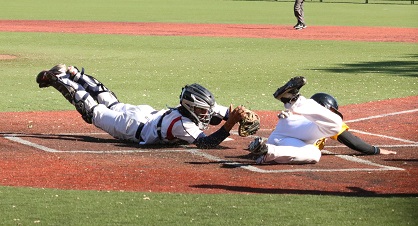 The Santa Rosa Junior College baseball team is subscribing to the ‘it’s not how you start; it’s how you finish’ mentality. The Bear Cubs lost both Game 1 of the Regionals and Super Regionals before coming back to win each series.

In Game 1 of the California Community College Athletic Association Northern California Sectionals, the Bear Cubs faced a 5-1 deficit, but stormed back and defeated Chabot College 7-5 May 20 at Cook Sypher Field.

Holding onto a one-run lead in the top of the eighth inning with a runner on second, SRJC reliever Anthony Bender allowed a two-out base hit to left field. Left fielder Mitch West threw out the potential tying run at the plate with help from catcher Charlie Magana, who dove back towards the plate to make the tag.

“The guy got a pretty good jump so I just got rid of it,” West said. “I couldn’t really think about it. That’s probably why the throw was so good.”

Down 5-2 in the bottom of the fourth, first baseman Ryder Kuhns drove home two runs with a single. Later, after a wild pitch put runners on second and third, designated hitter Jeff Bart hit a sacrifice fly to right field to tie the game.

“I was just trying to focus with two strikes,” Bart said. “I kind of got myself into some holes with some bad swings, but I got the pitch and just swung through it.”

Kuhns and Bart each finished with one hit and two RBIs.

Starting pitcher Ezio Bruchler had a rough outing and allowed three runs in the first inning. He gave up three hits, three walks, hit two batters and struck out two in his two-inning start.

Bruchler recieved help from right fielder Zach Hall in the second inning. After allowing a single and a walk to start the inning, Hall made a diving catch going towards the right field line and threw to first to double-up the runner.

“These guys picked me up,” Bruchler said. “That’s what a team does. They did their job today. Winner punches a ticket to Fresno. We’re not going to roll over at the end of the day.”

Reliever Jackson Ketron had trouble getting out of the third inning. With two outs he committed a throwing error, walked in a run and balked in another to stretch Chabot’s (27-14) lead to 5-1.

SRJC’s Ladd Ah Choy kept the Bear Cubs within striking distance in the middle innings. He allowed two hits and struck out three batters in three innings to get the ball to the back end of the bullpen, Jarod Noonan and Bender, with a one-run lead.

“I just knew my job was to keep this where we are,” Ah Choy said.

Shortstop Jake Scheiner drove in the Bear Cubs first run with an RBI-double in the first inning. He finished 2-for-3 with two doubles, two RBIs and two walks.

Third baseman George Foster delivered an RBI-single to center field for a much needed insurance run in the eighth inning. He finished 2-for-3 with two walks and a RBI.