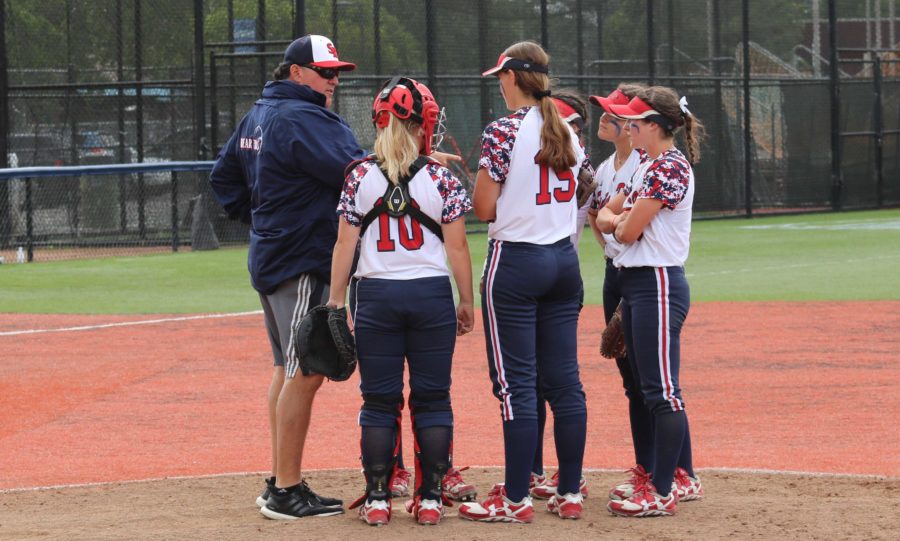 SRJC softball head coach Phil Wright makes a visit to the mound to discuss the team’s strategy for the next batter in a game against San Joaquin Delta College April 21 at Marv Mays Field. The SRJC softball team currently has a 7-11 record in conference play and an overall record of 18-18.

The Santa Rosa Junior College softball team entered its final week of the season hoping to finish a disappointing year on a high note.

During a season that was as unpredictable as the weather that soaked the Bear Cubs’ doubleheader against San Joaquin Delta College April 21, the team earned a split, winning the first game by one run before losing the nightcap. The team rode clutch hits and a strong pitching performance from Ashley Stevens in game one.

Stevens, a sophomore who graduates from SRJC this spring, talked about the importance of a strong finish as a building block towards success next season. “As the season progressed, we learned to relax and play together, building confidence with each win,” she said. “The team next season can look at the sophomores who emerged as leaders this season and emulate them in playing each game like it’s their last.”

The team started slow this season, and couldn’t rebound from the early hole, but started stringing wins together as the season wore on.

A weekend doubleheader against Sacramento City College gave the Bear Cubs a chance to gauge their improvement against the conference’s best team. The Bear Cubs struggled to execute at the plate and in the field, and lost both games by margins of 15-0 and 13-4.

The team improved drastically in all facets of the game this season, but a focus on the fundamentals and how they matter in turning one-run losses into wins is sure to be a point of emphasis among the coaching staff heading into next season.

While the results from the weekend were not encouraging, every player was in good spirits while talking about the team’s growth during the season. All their friendships were made stronger as a result of facing adversity together throughout the year.

“Being together with your teammates constantly, through tough times and good ones, makes you appreciate them even more as human beings,” Stevens said.

The Bear Cubs wrap up the season and bid farewell to several sophomore leaders April 26 at Sierra College.