Sharks playoff report: Sharks knock out Kings 6-3 in game five in the first round of playoffs 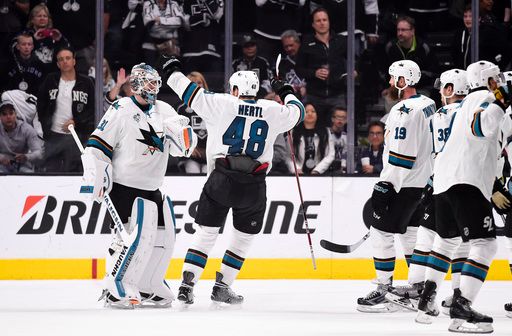 Courtesy of FoxSports.com Left winger Tomas Hertl celebrates with goaltender Martin Jones after the San Jose Sharks defeated the Los Angeles Kings 6-3 in the opening playoff series. It was the first time the Sharks defeated the Kings in the playoffs since 2011. Hertl finished the series with two points on an assist and a goal. The Sharks faceoff against the winner of the Anaheim Ducks and Nashville Predators series in the second round of the playoffs.

After three-straight playoff series and 19 valiant battles, the San Jose Sharks beat the Los Angeles Kings in a playoff series for the first time since 2011. The Sharks finished off the Kings 6-3 in game five, winning the series 4-1 and moving on to the second round of the postseason. Sharks’ rookie Joonas Donskoi picked up two goals, including the game winner, and captain Joe Pavelski continued his playoff point tear with his fifth goal of the series.

The Sharks opened the scoring just over a minute into the game with Donskoi’s first goal, assisted by center Logan Couture. Center Chris Tierney doubled the lead at 11:21 when he took a pass from defenseman Brent Burns and snapped a shot high past a screened Kings’ goaltender Jonathan Quick.

The second period was a wild one. It opened with Sharks’ left winger Matt Nieto knocking in a tipped puck from behind the net past Quick to give the Sharks a 3-0 lead.  Sharks’ forward Patrick Marleau nearly scored on a breakaway, but was tripped by King’s defenseman Jake Muzzin and given a penalty shot. Marleau attempted to go top-shelf on his penalty shot attempt, but Quick was able to block it with his chest.

The Kings got on the board when their center, Anze Kopitar, tipped Kings’ defenseman Drew Doughty’s slap shot past Martin Jones at 7:44 of the period. Four minutes later, Kings’ center Jeff Carter made it a one-goal game when he found himself all alone in front of the net and beat Jones’ blocker side. The game then turned on the Sharks. Kings’ winger Kris Versteeg beat Jones’ glove side to tie the game.

The Sharks needed the best third period of their entire season, and they got it. A scramble in front of the Kings’ net led to Burns backhanding a pass to Donskoi, who whacked it by Quick and into the net at 3:58 of the third period. It all unraveled for the Kings after that. Pavelski took a low shot along the ice, that Quick completely whiffed on, and beat him through the legs to make it 5-3 Sharks. An empty netter for San Jose rookie Melker Karlsson with 22 seconds to go sealed the game and the series for the Sharks.

The Sharks will get a much-needed rest before returning to action later in the week. They will play the winner of the Anaheim Ducks and Nashville Predators series in the Pacific Division Finals.