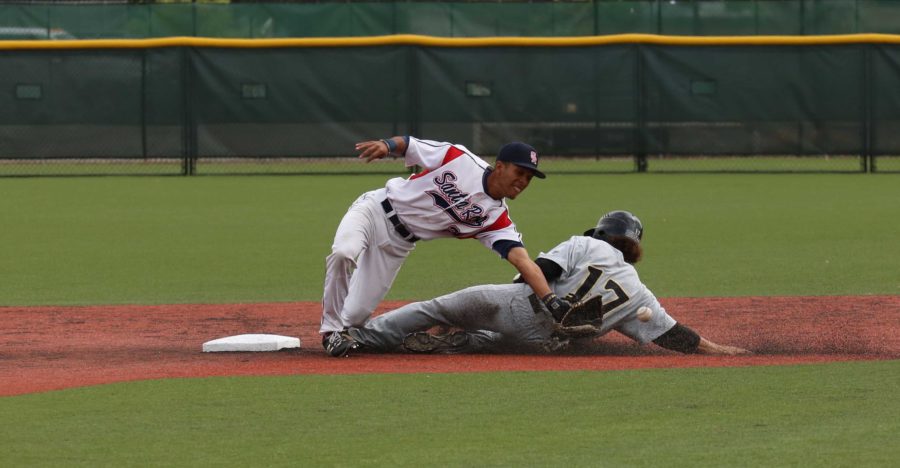 Santa Rosa Junior College second baseman Myles Andrews attempts to tag out a San Joaquin Delta runner trying to steal second base. SRJC captured its first conference championship since winning the Big Valley Conference in 2005, on its way to winning the State Championship.

“We’re not going to act like it’s our first time here,” said assistant coach Tom Francois. “We have more work to do. We want to win the next two also.”

Scheiner’s sixth home run of the season gave SRJC a 2-0 lead in the first inning.

“We feel good knowing that we have accomplished one of our goals [winning conference],” Scheiner said. “But we are still focused on winning the series against Cosumnes. We still have a lot of work to do in order to play as long as possible and win a state championsip.”

Estes allowed a leadoff single to advance to third base on a passed ball and a wild pitch in the first inning. The runner eventually scored on an RBI-single. Estes retired the next 10 batters he faced, allowing the Bear Cubs to add on to their lead.

Zach Hall scored on a wild pitch, and Charlie Magana hit an RBI single to increase the lead to 4-1 in the fourth inning. Magana is five for his last 14 with three RBIs.

Hall tacked on his third home run of the season to lead off the sixth inning.

With a four-run lead, Estes labored through the sixth inning. He allowed back-to-back singles to start the inning and they advanced to second and third on a passed ball. Both runners scored and Estes eventually struck out the side to end the inning with a 5-3 lead. Estes finished after six innings. He allowed three runs on seven hits and one walk. He struck out seven.

During the inning, third baseman George Foster made a diving stop on a ball, which was hit sharply down the line. His stop prevented a sure two-out RBI double.

“It was a huge defensive stop for us to keep the lead and gain momentum,” Scheiner said.

Jared Noonan pitched the final three innings. He worked around four walks, allowed just one hit and struck out five.

After the win, players gathered in right field, happy about winning the conference but subdued.

“It revealed so much about these guys,” Fracois said. “There’s no cockiness, just confidence.”