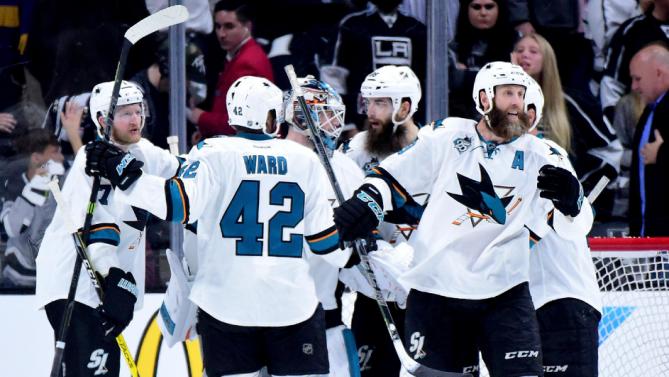 San Jose Sharks’ captain Joe Pavelski led by example, scoring two goals in a 4-3 Sharks win over their archrival the Los Angeles Kings in game one of the Stanley Cup Playoffs April 14 at the Staples Center in Los Angeles. The win gives the Sharks the all-important 1-0 lead in the Western Conference Quarterfinal seven-game series.

The winning goal came just 17 seconds into the third period. Pavelski single-handedly walked into the Kings end, fought off Kings’ forward Anze Kopitar behind the net and wrapped it into the other side for the 4-3 lead.

Sharks’ goaltender Martin Jones earned the win in his first career playoff start. He made 19 saves on 22 shots in the victory.

The game didn’t start out well for the Sharks though. The Kings opened the scoring just three minutes in. A Sharks’ defensive zone turnover led to Kings’ defenseman Jake Muzzin outwaiting a sprawled out Jones, putting the puck behind his pads and having it ricochet off Sharks’ forward Tomas Hertl’s skate and into the net. Kings’ left wingers Milan Lucic and Tanner Pearson drew the assists on the first goal of the series.

In the second period, Sharks’ center Joel Ward won a key faceoff in the Kings’ end of the rink. Burns got the puck and put it through a maze of skates past Quick to give San Jose a 2-1 lead.

Ward received an interference penalty two seconds after the goal, which led to Kings’ forward Jeff Carter putting an odd backhand off Burns’ stick and past Jones on the power play to tie the game at two. Lucic earned his second assist of the game on Carter’s goal, and Kopitar notched his first.

A delayed penalty call on Muzzin nearly led to San Jose retaking the lead, but Hertl shot the puck in the net after the referee blew the whistle. This was followed up by a power play chance for Sharks’ forward Patrick Marleau. With Quick completely out of position, Kings’ defenseman Drew Doughty slid into the crease and blocked Marleau’s shot from crossing the line.

Doughty himself would take a hooking penalty with four minutes remaining in the period, but Kings’ center Trevor Lewis stole the puck and fired a hard wrist shot past Jones for the first shorthanded goal of the series and a 3-2 Los Angeles lead.

After Pavelski’s goal in the third period, the Kings pressed to tie the game, but Jones held down the fort. He added eight saves in the period for a 19 save total. Jonathan Quick tallied 19 saves of his own on 23 shots in his team’s loss.