A Chance Worth Taking 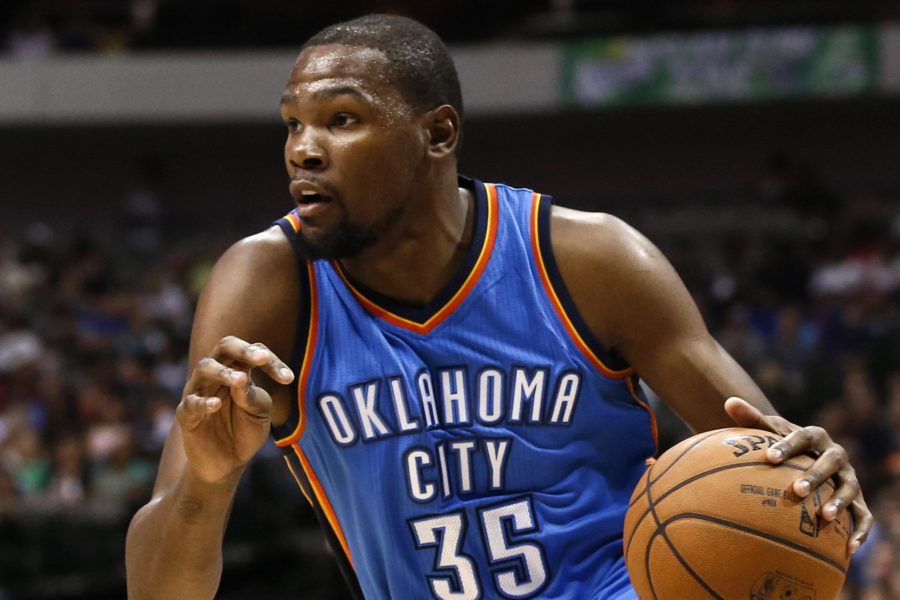 Oklahoma City Thunder forward Kevin Durant drives to the basket during a game. The former MVP has returned to form in 2016 after missing all of last season due to injury.

The Golden State Warriors are approaching the playoffs as the odds-on favorite to repeat as NBA champions. The Warriors seem to set a new NBA record every night and they’re the most entertaining players to watch in sports.

But the Warriors should pursue free-agent-to-be Kevin Durant at all costs during the upcoming offseason, whether they’re the two-time defending champions or not.

The Warriors are a team built to compete for the long haul. The team’s three best players, Stephen Curry, Klay Thompson and Draymond Green are all under 28, just entering their primes. The trio is already dynamic and continues to steadily improve each year.

As good as the Warriors are, the San Antonio Spurs are right on their heels, and exemplify the competitive staying power the Warriors have only recently developed. This is the main reason I believe Golden State must sell out for Durant. Standing pat is not a viable option when you’re one stumble away from a powerhouse overtaking you for league supremacy.

Even the best of the best must constantly work to improve and stay ahead of the pack.

Complacency inevitably leads to inferiority. The Warriors must take a chance and shake up their core if they wish to stay perched atop the basketball world.

Signing Durant would cost the Warriors several bench players as well as half the quartet of Harrison Barnes, Andrew Bogut, Festus Ezeli and Finals MVP Andre Iguodala. While these losses may hurt fans emotionally, Kevin Durant is far superior to any of these players.

During the 2016 season, Durant has performed at a higher level than any player not named Curry. With averages of 28 points, eight rebounds and five assists, Durant embodies the very meaning of the term dynamic.

While it can be scary to sacrifice what seems like a sure thing to aim for something even better, that is exactly what the Warriors must do if they wish to continue their reign atop the league for years to come.