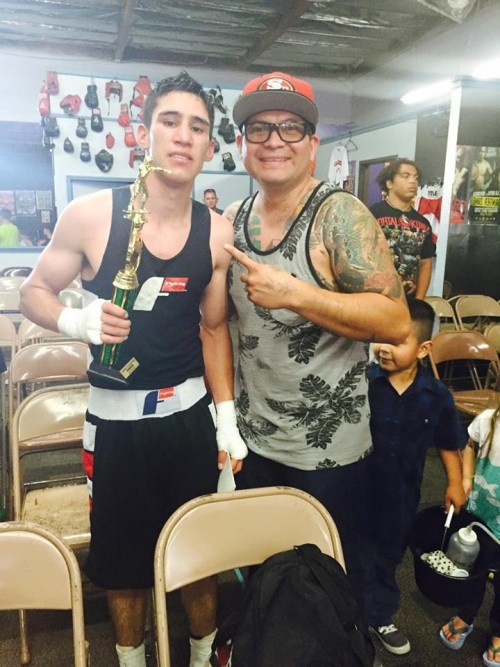 Santa Rosa Junior College student Brian “Hit-Man” Jimenez celebrates another win with his coach Hector. Jimenez balances work, school and a full time commitment to becoming a professional boxer and reaching his ultimate goal of making a name for himself in the super featherweight division.

Starting boxing at 12 years old, Jimenez has stuck by his passion coming into SRJC and is planning on going pro next year.

Jimenez graduated in 2015 and decided to start his college career at SRJC for a certificate in criminal justice.

His background knowledge in criminal justice is just a back up. Jimenez’s overall goal is to become a professional boxer and make a name for himself in the super featherweight division. Only eight months after beginning boxing, Jimenez began his amateur career and his record stands at 12-4, with three  knockouts.

Jimenez trains out of Warriors 4JC Gym in Rohnert Park throughout the week. He maintains his school load and works at a cabinet shop in Santa Rosa.

Dedication and determination to the sport has given Jimenez the mental strength to get through his time in college. As many college students are aware, it’s complicated enough balancing work and school, let alone training for upcoming fights.

“I start early,” Jimenez said. “I have to be at work at six in the morning, go to school after work; and I’m training about five days a week right now.”

Boxing requires fighters to make the sport their life. He has no problem with putting boxing first and is excited to turn his favorite hobby and sport into a career.

Luckily for Jimenez, he has a great support system in and outside the gym. His family introduced him to boxing and his coaches at Warriors 4JC want to see him go far in the sport.

“My brothers and my uncles started going [to the gym] but my mom didn’t want me to go at first,” Jimenez said. “My brother talked my mom into it and then I was able to go.”

Once he began training at Warriors 4 JC, coach Robert Muro, the owner of the gym, saw potential in Jimenez and knew he was going to be something special.

“Brian is one of those guys who has a natural ability,” Muro said. “He’s always been a natural.”

For the last six years or so, Jimenez has been at Muro’s gym. He started off training and learned his fighting style from Muro. Jimenez described himself as a counter-puncher and said Muro taught him the way of counter-punching.

Muro explained how it’s time for Jimenez to go elsewhere to receive the necessary training he needs to make his pro debut.

“He’s at a point where he needs to be taken to another level,” Muro said. “I’d like to see him go somewhere else and develop something else.”

Jimenez has plans to travel to Los Angeles this summer at professional boxer Abner Mares’ private gym to begin his training as a professional fighter.

“If everything works out over there then I’ll just stay over there,” Jimenez said.

Jimenez is now currently enrolled as a part-time student and is training for a fight coming up in April at East Oakland Boxing Gym in Oakland, California.