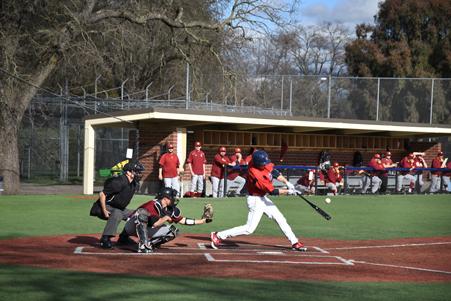 SRJC ‘s Matt Bone connects for an RBI single in a 4-0 win over De Anza College.

Fifteen batters came to the plate during the Santa Rosa Junior College baseball team’s 10-run fifth-inning, leading to a 16-1 win over College of the Redwoods at Cook Sypher Field Feb. 5.

Mitch West, who leads the Bear Cubs with six RBIs this season, contributed a two-RBI single, making the score 7-1. Jeff Bart, who replaced West during the onslaught, capped off the inning with a two-out, two-RBI double to make the score 15-1. Bart had a team-high three RBIs for the game.

The game started shaky for SRJC’s starting pitcher Ezio Bruchier. He struggled to throw strikes. After falling behind 3-1 to the leadoff batter, Bruchier allowed a double to start the game. That eventually led to College of the Redwoods only run of the game when a single to right field gave them a 1-0 lead.

Bruchier’s day ended after walking the fourth-inning leadoff batter on four pitches. He threw 26 of 53 [49 percent] pitches for strikes, allowed three hits and walked two batters. Zach Hall got the lead back in the second inning by smacking a 1-2 pitch to the right field wall for an RBI triple.

“That was awesome,” Bryce Nagata said. “Zach and I have struggled to start the year and we finally broke out. I’m excited he hit that.”

“He hung a curve,” Hall said about the first of his two triples. “I saw it right out of his hand and hit it.”

Ladd Ah-Choy came in to pitch with a one-run lead in the fourth. With runners on first and second and nobody out, Ah-Choy induced a double play and struck a batter out to keep the Bear Cubs’ lead intact.

With the bases loaded and one out in the bottom of the fourth inning, George Foster hit into a potential inning ending double play but beat the throw to first to keep the inning alive and extend the Bear Cubs lead to 3-1. The next batter, Jake Scheiner, ripped the first pitch down the left field line for a two-RBI double to open up the Bear Cubs lead to 5-1. Foster and Scheiner have five RBIs each through the seasons first five games.

“We’re getting strikes and hitting the ball hard,” Foster said of the team’s offense that scored 30 runs in their two games against College of the Redwoods. “That’s what we do.”

Hill gave up one hit and struck out one batter in each of his two innings. He has now thrown eight shutout innings, struck out seven and allowed five hits on the season.

The Bear Cubs won three games in a row.

Alec Rennard set the tone on the mound for the Bear Cubs, picking up the wins in each of his first two starts.

“You know when he’s pitching by the look on his face,” Magana said. “He brings the same mentality every day. Nothing fazes him.”

The Bear Cubs’ next game is against Laney College at 2 p.m. Feb. 9 at Cook Sypher Field.