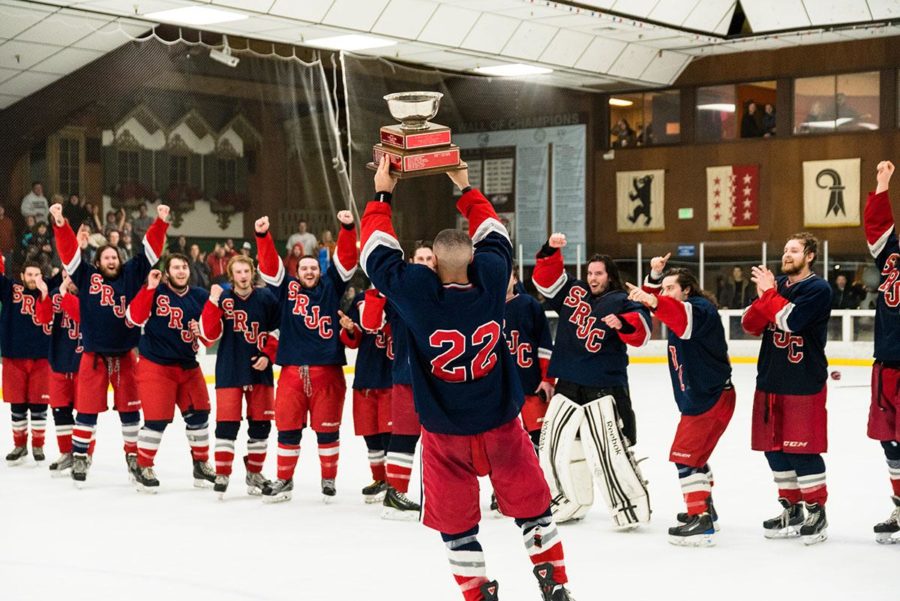 It was the first Santa Rosa Junior College hockey championship game ever played at home, and fans did not disappoint.

The building was packed to the rafters, and the noise level was deafening from the opening faceoff until the final buzzer when Polar Bear players came pouring off the bench to celebrate.

“I’ve never played in the building when it was this packed,” alternate captain and team president Stephen Wolmarans said.

Wolmarans scored a hat trick to lead the SRJC ice hockey team to its fourth straight Pacific Coast Hockey Association championship in a 7-3 win over archrivals University of California Davis in front of a sold out crowd at Snoopy’s Home Ice.

“It’s an extremely special moment,” Wolmarans said. “It feels awesome to win at home in front of the fans.”

SRJC captain Josiah Nikkel has been with the team for all four PCHA championships, but the win at home made this one the most memorable for him.

“Every championship has been exciting,” he said. “But this one is by far one of the best, because it was in front of all of our fans and [Snoopy’s] was packed to the front doors.”

For SRJC head coach Blake Johnson, it’s his first championship from behind the bench after playing with the last three PCHA-winning SRJC teams. “It’s unreal to win something like that at home, and it’s a game that all these guys will remember,” Johnson said.

UC Davis opened the scoring seven minutes into the game with Kaz Machida shooting the goal. Wolmarans tied it at the halfway mark of the period. Wolmarans scored the go-ahead goal with just 45 seconds left in the first, thanks to some nifty passing from teammate David Lundgren.

It was a much slower start to the game than players were used to in a rivalry game. Nikkel said, “It took us a little while, cause I’m sure some guys had jitters. Once that was out of the way, we got back to how we normally play.”

The second period was a tight defensive battle before rookie Max Brownlee gave the Polar Bears a 3-1 lead at the six-minute mark. Fellow rookie Evan Hastings and alternate captain Lundgren picked up the assists.

Machida’s second goal made it a one-goal game with eight minutes to go in the second before Brownlee put home his second on an assist from Colin Ridenour.

The third period was not without controversy, as Polar Bears goalie Chris Tomaszewski was given a  10-minute unsportsmanlike conduct penalty. Johnson subbed in backup goalie Jacob Pavsek with 17 minutes to go, a 4-2 SRJC lead and championship on the line.

Less than 30 seconds after Davis’ goal, Wolmarans completed his hat trick and restored the two-goal lead. Larry Hansen made it 6-3 SRJC and opened the floodgates for the Polar Bears. Ridenour and Alec Runge each picked up their second helpers of the night on Hansen’s tally.

Nikkel put in an unassisted goal late in the game to finish off UC Davis and seal the PCHA title with a 7-3 victory. SRJC goalies Tomaszewski and Pavsek combined for 27 saves on 30 shots in the win.

Bringing home the PCHA Adams Cup in a rebuilding year was a great feat for the Polar Bears. This win was a long-awaited accomplishment for several players.

“It feels great to win as a team, but on a personal level it feels great to get the monkey off my back,” said Jackson Waldron. “I’ve been here three years and this is the first time I’ve got to hoist  the cup on the ice. It couldn’t have been more special doing it in front of the home fans.”