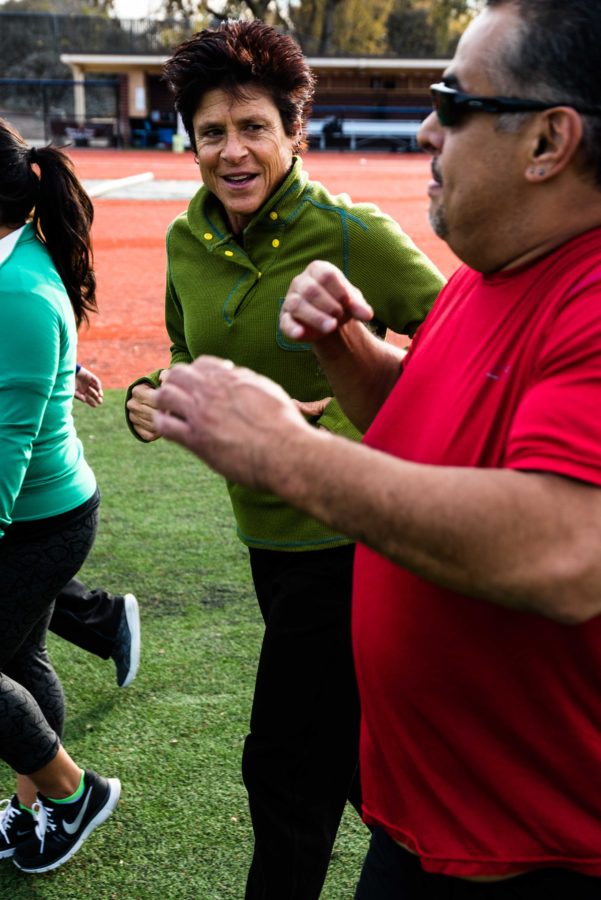 College Soccer Coaches Association named her to its Hall of Fame.

“I am honored and humbled by the awards I have received, what is really, truly important to me is the ‘rewards’ of coaching, not the ‘awards,’” Stanley said.

“Those rewards are working with young student-athletes, teaching them life skills through athletics, and hopefully making a tiny contribution to their growth

and lives as citizens in this world.”

Stanley played soccer her entire life, but she didn’t know it would lead to coaching. After years of playing and five knee surgeries later, it was time to find

“I got into coaching and loved it because it replaced the passion I had for playing so that was unexpectedly awesome,” she said.

Coaching became her full-time profession, working part-time jobs at all levels from high school, to camps to international tours. At one point she had 12 part-

Finally her first full-time position came along at the University of Notre Dame. She lived in Indiana for two years as the assistant coach, but she still longed for

a head coach position. When the University of Southern California opened a new soccer program, she quickly applied.

“I found that position and that school had a lot of what we read about in the paper about‘win at all cost’ attitudes regardless of what’s at stake. I started being

forced to make decisions I didn’t agree with anymore philosophically. That’s not why I started coaching,” Stanley said. “I was basically told you win or you’re

fired. You win at all cost regardless of what that means and so I resigned and I didn’t have a job. That’s how adamant I was about that.”

While that door closed, little did she know a better opportunity called. Her friend Liz Belyea called to tell her SRJC had an opening for head coach, so she

“I think she’s a wonderful person,” Belyea said. “She puts 150 percent in everything she does.”

SRJC called Stanley for an interview, and it didn’t take long for her to fall in love with the college.

“The first thing my athletic director said to me, first thing, was whoever gets this position, winning is important yes, but your student-athletes have to have a

good experience and they have to matriculate. That’s what we want. I’m like ‘That is so what I want too,’” Stanley said.

“When I came here for the interview, I walked out of here thinking, ‘Oh my gosh, this is the greatest place on earth.’ Plus the beautiful area; everything about it

Stanley was SRJC’s women’s soccer coach for 12 years following that interview. She loved every minute and describes it as the best experience of her career.

Eventually she wanted more, and in 2007 stepped down and began teaching different types of fitness classes, sometimes teaching up to 11 classes at a time.

“I got my master’s degree in wellness and I wasn’t really using it the way I wanted and I just kind of knew it was time to move in a new direction,” Stanley said.

“I love wellness because it affects everyone. Everyone wants to be well. Physically, emotionally, spiritually, mentally, we all want that. And we all struggle with

A year-and-a-half ago she decided to pursue wellness beyond her classes. After 20 years at SRJC, she took a sabbatical last semester. In Fall 2015 she returned,

teaching two classes on health and wellness, as well as yoga and walking/jogging for fitness.

“I’m so delighted. I love it as much as I did coaching. It’s my passion to be sharing information about health and wellness, just because I know it helps every

student. It’s extremely rewarding and satisfying,” she said. During her sabbatical, Stanley still had much work to do. SRJC selected Stanley to give the 2015

Tauzer lecture, a speech given to every SRJC staff and faculty member.

“You basically spend 10 months preparing for an hour lecture, because you’re in front of your peers and everyone sets the bar so high. I spent all of last year

preparing for this lecture,” Stanley said. “I was very nervous about it and also excited to spread awareness for staff wellness. My whole thing is I want to make

wellness simple, accessible and affordable. I had so much fun; it was awesome.”

In Burbank Auditorium before more than 700 people, Stanley gave an interactive lecture. She got everyone doing stretches, gave out green drinks and even had

SRJC President Dr. Frank Chong up on stage to do squats and lunges.

“I’ll tell you that guy has a mean squat. His squat is perfect. He goes 90 degrees and straight back. He’s got award-winning squats,” Stanley said.

Despite the business of Stanley’s career, she still finds time to pursue her passion for taking care of animals. She volunteered at over eight shelters in the

county since she’s been here.

“My avocation, what I love to do, what I’ll do till I die, is working with animals. I do a lot of volunteer work in our community with animals. That’s kind of what

She also remains interested in SRJC women’s soccer team. In her last year of coaching, Crystal Howard was her assistant coach, and is now the head coach. They

share an office, and Stanley loves getting updates on the team.

Stanley’s recent Hall of Fame award honored and humbled her. The CCCSCA Hall of Fame is for all community college coaches, men and women, honoring

someone’s past contributions to soccer as a coach who’s not still currently coaching. In the past she has been added to the Chico State University Hall of Fame

and was the National Coach of the Year, among many other honors.

“I’m pretty happy now. I really feel like I’m doing the work I wanted to do professionally. I’m very attached to my profession personally too,” Stanley said. “I

feel so blessed to have such a purposeful job. Every day I think, ‘Man I’m so lucky to be here.’”