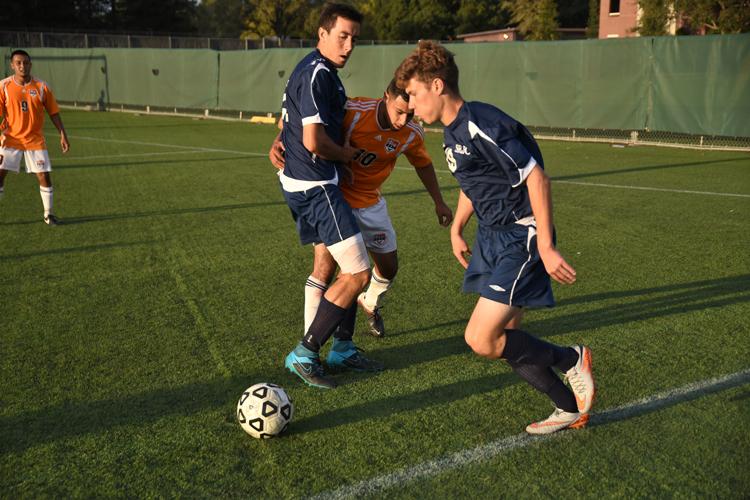 On the pitch, the team rebounded from a tough loss, easily dispatching Consumnes River College by a final score of 3-0.

The team put forward a dominant performance on both sides of the ball, stifling the CRC attack with quick reads and excellent closing speed from the back line

Bear Cubs forward Chris Ochoa talked about the importance of rebounding from a loss.

“This game was a good test of our resolve and determination, coming off a tough loss to Foothill College,” he said. “I feel like we played as a team and we were determined to get back on track. Everyone did their job and we were able to get the result we wanted.”

Ochoa leads the Bear Cubs in goals scored with 10.

The Bear Cubs dominated the time of possession, using excellent ball control and passing to keep the ball in CRC territory for nearly the entire game.

Midfielders Chris and Darian Huerta led the offensive attack, playing with speed and poise that Consumnes simply could not keep up with.

Earlier in the week, the Bear Cubs lost a hard-fought 2-1 contestagainst Foothill College, putting together a strong effort but falling just short.

With Friday’s win, the team improved to a Big Eight Conference best 12-2, its .857 winning percentage also the best of any team in the state.

“To continue being successful we have to play as a whole, not as individuals. Keep a high work rate, and apply what we learn at practice to the games,” Ochoa said.
The Bear Cubs are back in action Oct. 30 with a home game against San Joaquin Delta.

The win marked the 12th time this season the Bear Cubs shut out their opponents. The team is showing, game in and game out that strong defense wins.

Team captain Holle Depina provided the offense for the Bear Cubs in their win as she scored the lone goal of the game.

Depina now has eight goals on the season, third on the team in goals scored behind Amanda Galbraith and Sophia Maso.

“I think much of our success has come from us gelling as a unit and playing together as one,” Depina said.

Depina gives a lot of credit to Galbraith who was named Big 8 Conference Player of the Week previously this month.

“She [Galbraith] has had a big impact on the team this year,” Depina said. “She is a very skilled soccer player who can score and assist goals. She is a diverse

player who brings a big presence for us at the forward position.”

“Amanda’s impact  on the program is huge. She is very dynamic, and a dangerous player on the field,” she said. “Her teammates support her, and have made her

an even better player on the field. She loves to score goals and is a fierce competitor.”

With six games remaining, the Bear Cubs look to finish undefeated. With a high level of success on defense and offense, as well as strong leadership, it looks

“As long as we stick together and continue to play as one I think we are going to have success the rest of the season,” Depina said. “We have high expectations

for ourselves as a team, and we will continue to work as hard as we can to fulfill those expectations.”