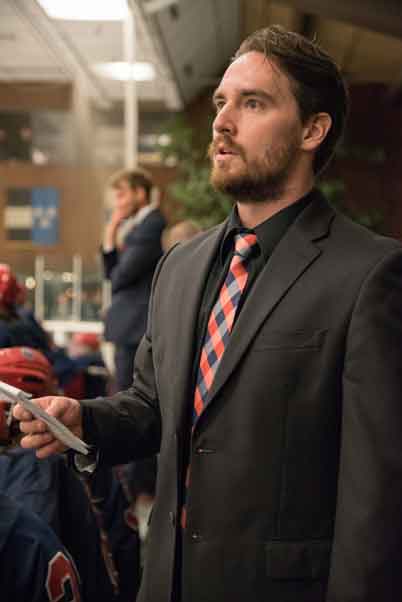 New head coaches lead two fall sports teams this semester at Santa Rosa Junior College. Both the women’s soccer team and men’s hockey team have a change of leadership at the top.

For the hockey team its new head coach is very familiar with the team. Blake Johnson is in charge of the squad after playing for them in the past five seasons. Johnson looks to make the transition from the ice to behind the bench. “After playing my final season last year, I knew that I wanted to be involved with the club in some sort of capacity,” Johnson said.

Johnson takes over for former head coach Mike Kovanis, who with Tom Billeter established a winning reputation for the Polar Bears. Johnson looks to continue those winning ways. “I have some previous experience coaching youth hockey,” Johnson said. “As a leader on last years team, I already have some respect from the returning players. That alone can sometimes be the biggest hurdle for new coaches.”

Leading a group of athletes that were once teammates is never easy for anybody, let alone leading a team with known successes. “It’s a big responsibility. I need to ensure the success of the club and our players on and off the ice,” Johnson said. “One of my biggest challenges will be coaching some really good friends while not being ‘one of the guys’ during the season.”

Johnson doesn’t believe that the team’s success is all on him. “Coaches receive too much credit when a team succeeds, and too much blame when the team fails,” he said. “I will give the players the tools and direction needed for them to succeed, but ultimately, it’s up to group of men on the ice.”

From the ice to the field, the new head coach of women’s soccer is Crystal Howard. She previously was the assistant coach at Sonoma State University for two years. “When the position opened up [SRJC soccer head coaching job] I applied for it. I knew I was ready to take the leap into being a head coach,” Howard said.

Coaching is nothing new to Howard, who has 12 years of coaching experience. She has bounced around coaching jobs from youth soccer to El Molino High School, and has experience coaching here at SRJC, SSU and a top youth club in Sacramento, Placer United.

Besides coaching, Howard played soccer growing up. She played for Santa Rosa United, high school soccer, and college soccer. “I grew up playing in Santa Rosa United from u9-u18s. I was a four-year university player at Montgomery High School, then transferred straight to Sonoma State University, and played for four years there,” she said. To this day Howard continues to play soccer for both local women’s teams and co-ed teams at Sports City.

So far Howard has been successful as an SRJC head coach leading the women’s soccer team to a 6-0 record. However, Howard knows that it takes more than just a few games to reach true success. “In order to be a successful coach you have to continue to grow year after year just as you expect your student-athletes to do,” Howard said. “I want to learn from the players just as much as I want them to learn from me. Dedication and hard work for your players and the program.”

Howard not only looks to coach the team in soccer, but life lessons in general. “Being a leader for young female student athletes and show them that whatever their dreams and goals are, with hard work, confidence and dedication they can accomplish anything they want both on and off the field,” she said.

With hockey season just beginning, and women’s soccer through a third of it’s season, both coaches plan to lead their respective teams to championships.