Hockey Starts with a Bang 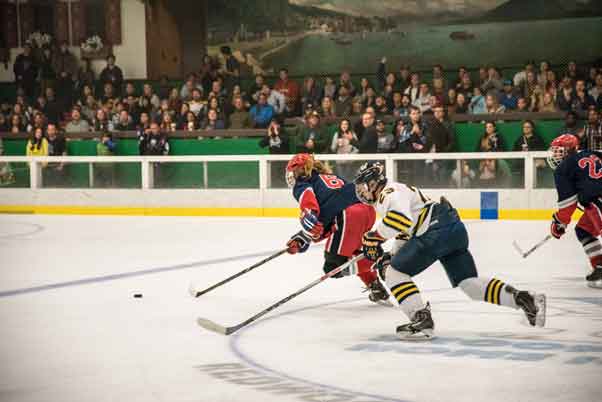 Fans piled in to Snoopy’s Home Ice Arena Sept. 25 to watch and cheer for the Polar Bears in their first game of the 2015/2016 season.

In their first time on the ice since winning the Pacific Collegiate Hockey Association tournament championship in February, the Polar Bears sent the fans home happy defeating the University of California Berkeley Golden Bears by a final of 7-4.

In a physically tough face off between the clubs, the Polar Bears proved to have the upper hand. “Everyone contributed, the veterans did, the rookies did, the goaltender played great,” said head coach Blake Johnson.

The Polar Bears scored within the first five minutes of the game to hand themselves an early 1-0 lead. Max Brownlee found the back of the net for his first goal as a Polar Bear.

The Polar Bears scored twice more in the first period to stake a 3-0 lead.

To their credit the Golden Bears refused to roll over. They snuck two goals into the net to close out the first period trailing 3-2.

The second period had solid defense from both sides. Both teams managed to score a goal in the period to make it a 4-3 Polar Bear lead heading into the third period.

Nikkel proved to be a key player for the Polar Bears in the win. He contributed three assists along with his third period goal.

“It was a good physical game. It was a good win for us especially for a lot of the new guys to get some points on the board and get their first college games in,” Nikkel said.

The Golden Bears pushed across another goal in the third period to make it 6-4. The Polar Bears quickly fired back though with another goal by Brownlee to increase the lead to 7-4.

Brownlee made the most of his first college hockey game with two goals for the Polar Bears, playing a big role in the win.

“I went into the game really nervous playing with a bunch of guys that have played SRJC hockey before,” Brownlee said. “It felt great out there. Hearing the crowd roar, and my teammates congratulating me. It’s a great feeling.”

The win marked Johnson’s first win as head coach of the Polar Bears and started the team’s quest for consecutive championships on a high note.

The Polar Bears didn’t have much time to savor the win, as they played San Jose State University the next day and lost 5-4. Nikkel hit the back of the net three times in the game to collect the Bear Cubs first hat trick of the young season.

At the end of the second period, SJSU led 4-1, but the Polar Bears fought back to tie the game at four in the third period. SJSU took advantage of a power play with five minutes left in the game to find the back of the net, and ultimately win 5-4.

The Polar Bears look to get back in the win column when they travel to Boise, Idaho for a tournament Oct. 2.