From Bear Cub to Wild Cat 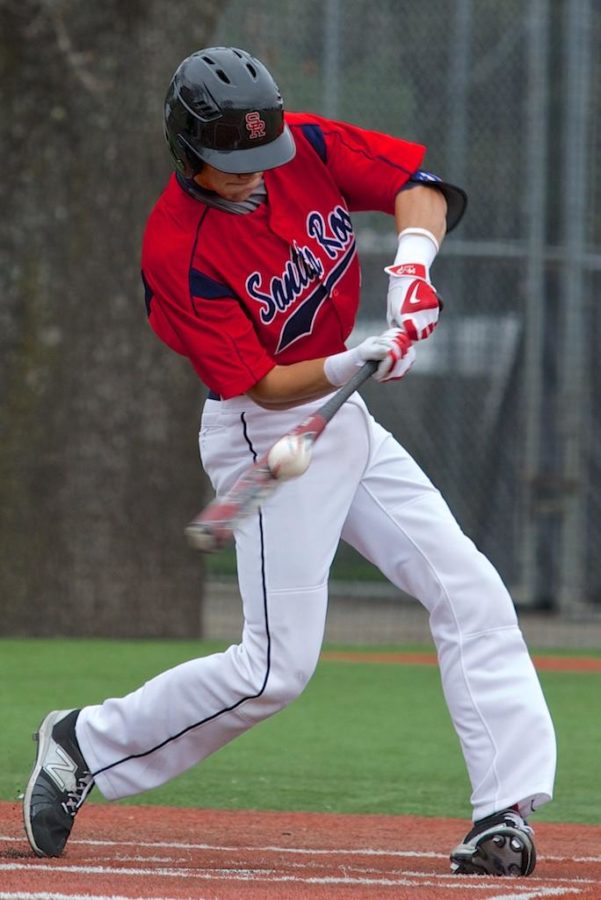 Ryan Haug takes a swing during a game in Spring 2015

Last season Bear Cub catcher Ryan Haug shone bright in the Big 8 Conference, earning himself the conference MVP award with his superstar play. With success came reward, as Haug was given a 60-percent scholarship to the University of Arizona.

Haug showed what hard work and dedication is all about with his performance last season. He hit .368 with an on-base percentage of .479. Even more impressive was the way he played defense. Catcher is universally known as one of the toughest positions to play in sports, and Haug made it look easy. He had a fielding percentage of .991, committing just two errors and allowing one passed ball.

That type of play earns you Division I offers. “Haug is one of the rare athletes with tremendous talent, and sincere humility,” said Santa Rosa Junior College baseball coach, Tom Francois. “Haug made the best of every day he was out there. And the results of that effort are what will continue to propel him to perform at the next level.”

“I was in shock,” Haug said. “Johnson was hired on a Monday, and was at my house by Wednesday to talk to my family and I about going there [Arizona]. We talked for a couple hours, and I was sold,” he said. By the end of the day Haug was verbally committed to the University of Arizona.

While attending the University of Arizona, Haug continues to work hard to improve his game. “The Pac 12 is another level and it’s something I am going to have to work at every day in order to succeed for both myself and my team,” he said.

Haug will suit up in a Wildcat uniform as the team’s starting catcher when the season begins this spring. “It’s truly an honor and blessing to be here, but there is a ton of work to be put in before that,” Haug said.

As he settles into life at the University of Arizona, Haug knows he made the right choice. “I wouldn’t change my decision for anything,” he said. If Haug keeps up his hard work, the next challenge ahead of him might be MLB. “All Haug has to do is to continue to strive towards his goal. He has an outstanding work ethic, and a boatload of talent,” Francois said. “He’s a very mature young man with a desire to get to the highest level of his game, and he will be relentless to succeed with every opportunity he is given.”