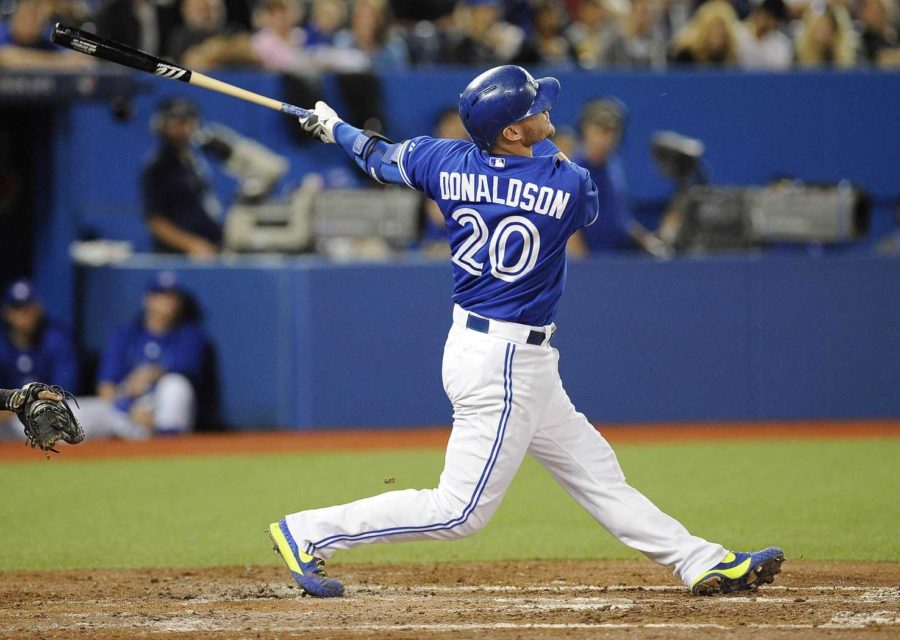 Josh Donaldson of the Toronto Blue Jays follows through on a swing.

sports. Each year during the summer months, the discussion begins in earnest. The winner of this

This MLB season is no different. Worthy candidates litter both the National and American

League landscapes, leaving those with a vote pulling their hair out, and baseball fans everywhere

relishing bar-room discussions for the ages.

While the list of notable players is long, here are the top five candidates in each league as we

head into the final weeks of the regular season.

In the American League…

Josh Donaldson: Toronto’s superstar third baseman has exceeded all expectations after being

acquired from Oakland last offseason for four minor players. With 37 home runs, 114 RBI, and a

.305 batting average, Donaldson is putting together what may be the best individual season in

Toronto Blue Jays history. Couple his mammoth individual season with the fact that the Blue

Jays are speeding their way towards the franchise’s first postseason in over 20 years, and you

have your AL MVP frontrunner.

Mike Trout: The 2014 winner has once again been one of the best players in the major leagues

this season. Checking in with a .294 average and 34 homers, Trout has kept a disappointing

Lorenzo Cain: As the best player on the best team in the AL, Cain gets obligatory notice in the

MVP race. But, upon deeper investigation, he deserves more then a passing glance. Couple his historically

good defense with a .320 batting average and nearly thirty stolen bases, and you have one of the most dynamic

Manny Machado: Machado’s MVP push has taken a hit over the last month as the Orioles have

nosedived out of playoff contention. But, even as the team around him has fallen apart, Machado

has kept up his incredible play, hitting .295 with 27 home runs, while strengthening his status as

the best defensive third basemen in the American League.

Nelson Cruz: Nelson Cruz has been one of few bright spots on a Mariners team that entered the

place. Cruz currently leads the AL in hits, and his 39 home runs are just one off the league lead

In the National League…

Yoenis Cespedes: Acquired by the Mets at the midseason trade deadline, Cespedes is trying to

do the impossible and win the NL MVP after spending half the season in the AL. With a .330

batting average and 14 home runs for the Mets since the late July trade, Cespedes has

transformed an anemic offense into the leagues best, catapulting the Mets into first place.

With 31 home runs and 92 RBI overall, Cespedes is having a season worthy of collecting the

Anthony Rizzo: At the tender age of 27, Rizzo is the veteran leader of a very young Cubs team

that has World Series aspirations. With nearly 30 home runs and an OBP of over .400, Rizzo’s

case for MVP is as simple and effective as the player it represents.

Buster Posey: The Giants All-Star catcher is quietly putting together another historically good

season, almost single-handedly keeping a team wrecked by injuries within striking distance for a

playoff spot. With a .332 batting average and 85 RBI, Posey is continuing to build an undeniably

Andrew McCutchen: The most dynamic player in the NL over the last several seasons,

McCutchen is once again in the thick of the MVP discussion, checking in with .302 batting

average and 20 home runs, while also playing Gold Glove caliber defense in center field for the

Bryce Harper: While Harper is having the strongest statistical year of any candidate, leading the

league in batting average, OBP and home runs; he is leading a historically disappointing

Nationals team that looks like a lock to miss the postseason. While an underperforming team

isn’t indicative of the type of season Harper is having, the Nationals collapse is sure to cost

Harper dearly among the MVP voters.

We won’t know the results of the MVP race until early November, meaning the next two months

are sure to be filled with discussions of every shape and form. With so many deserving

candidates, there is no wrong answer to the MVP question. So sit back, relax and watch history