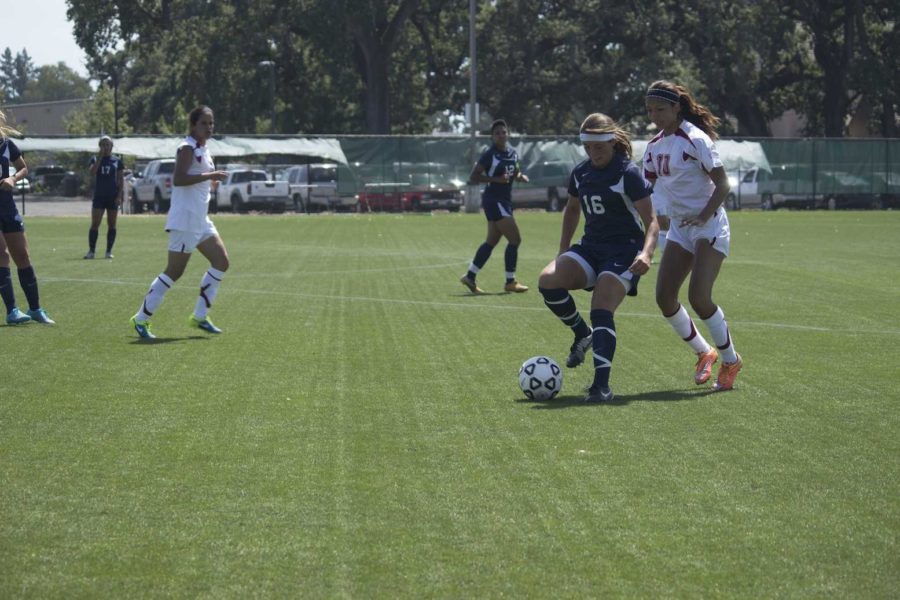 Santa Rosa Junior College student athletes eagerly await the fall season’s opening bell, ready to prove themselves between the lines. Whether they occupy the gridiron, the pitch, the court or the pool, these hardworking individuals work hard for themselves and for each other. They keep us on the edge of our seats, give us something to root for, and provide us with moments we will never forget. Here’s a look at what we will see this season…

Though the Bear Cubs, led by fourth year head coach David Wellman, are an incredibly young team, they head into the season confident in their ability to keep pace with every team on their schedule. While the team lacks experience at the collegiate level, nearly all the freshman runners were decorated Empire runners in high school.

On the men’s side, freshman Nicholas Rauch leads the team. Last year Rauch led a very strong Casa Grande cross country team, and was recruited by UC Davis before choosing to attend SRJC. Coach Wellman described Rauch as a “special runner,” and said that his track record of success in high school speaks to his ability and potential to be great at the college level.

Rauch faces more responsibility this season than a typical freshman, but says he is up for the challenge. “I expect us to finish first in the conference this season,” he said, echoing Coach Wellman’s sentiments about the team’s potential. Rauch added that on a personal level he is always working to improve as both a runner and a leader.

Other runners to watch on the men’s team include freshmen Justin Thurman [Santa Rosa] and Brady Lane [El Molino].

On the women’s team, sophomore star Erica Ruiz returns for a second season. She is joined by former Maria Carrillo star Gracie Issel and Ana Drake-Tripp [Healdsburg]. When asked about the challenges that freshmen runners face as they transition to the college ranks, Coach Wellman talked about how much stiffer the competition is from top to bottom in the Big 8 Conference, and pointed out the oft-overlooked fact that the length of a run increases from 3.1 miles in high school to 4 miles in college.

Wellman said he expects both the men’s and women’s team to compete for the top spot in the conference, and believes the men are capable of a top-ten finish statewide.

The Polar Bears put Championship Streak on the Line

Johnson believes this season will be a year of transition for the Polar Bears, but that won’t stop them from competing. “We lost several guys at key positions,”

Johnson said. “It’s going to be interesting to see how the new guys step up, take control and get used to playing a college game.”

Last seasons leading scorer Josiah Nikkel looks to mentor the new players, and hopes to show them what it takes to win a title. “He has a great shot, and tons of speed,” Johnson said.

Another returning player that Johnson notes as a strong leader is club president Stephen Wolmarans. “Stephen does nothing but work hard when he’s on the ice. He is a great leader both on and off the ice,” he said.

The Polar Bears also feature several talented freshmen that Johnson hopes will be key contributors to the team; including center Kurtis Klinger from British Colombia. “We have a lot of guys from out of the area on this team,” Johnson said.

Johnson emphasizes hard work as key to success for this year’s club. “Hard work on the ice, off the ice and in the classroom,” he said. “It’s [hard work that’s] what this club thrives on, and if we can continue this culture of hard work and accountability then I think we will be right there to compete for it [the title].”

As a new coach, Johnson knows he has to build the cohesiveness the prior winning teams had. “We will see how the guys react to a new voice in charge,” he said.

“I’m looking forward to working with these guys in my first year coaching at this level. I’m really excited to see what my coaching staff can do with this roster.”

Johnson and the Polar Bears look to start the season strong against UC Berkeley Sept. 25.

Heading into this season with the talent to match the expectations, the Santa Rosa Junior College football team looks to wipe away the memory of a heartbreaking loss in last seasons State Center Bowl.

“The ultimate goal of our team each year is to have a chance to play in and win the state championship,” said Head Coach Lenny Wagner.

“That journey starts with game one, then game two. Just about every game on our schedule is a playoff caliber team, so it’s going to be a challenge” he said.

While the team is receiving a strong infusion of freshmen talent, returning stars still figure to receive the lion’s share of playing time. Wide receiver Dominic

Drew, last seasons State Center Bowl MVP, will be counted on to once again provide the breakaway speed and scoring prowess that he is known for.

Sophomore Defensive Lineman AJ Davison leads the defense. “He is a dominant force in there. We have a great front seven and he is the backbone of our defense” said Coach Wagner.

Although winning is a top priority for the Bear Cubs, the football program pushes its players to be well-rounded and stay on top of academics as well as athletics.

“We want to make sure our guys are graduating and signing scholarships. We had thirty guys sign scholarships off last years team, and that’s something we are excited about,” said Coach Wagner.

Last season ended in heartbreak for the Santa Rosa Junior College women’s soccer team, as it was eliminated in the first round of the playoffs. This season the team hopes to erase the memory by making a Final Four appearance in the Northern California playoff tournament.

First year head coach Crystal Howard knows that this team has the talent and work ethic to make that goal a reality. While this is Howard’s first year coaching at any level, the transition from the pitch to the bench has been seamless. “I’m excited to be here, and to be part of this family,” she said.

When spending time around the team, it is apparent that the word “family” has quickly become the most important word in the team’s vocabulary. The team has 27 players on their roster, including nine returning players. With such a massive roster, it is paramount that each and every player has each other’s back.

The Bear Cubs will rely on their nine returning players to provide leadership and wisdom. “This is an incredibly young group of players, but I believe they will play far beyond their years,” said Howard.

Howard cited several sophomores when asked which players she thinks will be special this season, including Liz Duport, Holle Depina, and Angelica Moralez, who will serve as team captains. “Nearly all of our freshmen played highly competitive soccer throughout high school, and we have an amazing group of sophomore players to ready to show them the college soccer ropes. I couldn’t be more excited about this teams potential.

When addressing the freshmen, led by talented striker Amanda Galbraith, Howard stresses the importance of playing as a cohesive group, keeping their heads high, and staying focused on their preseason goals.

Splashing Towards the Postseason

The Santa Rosa Junior College men’s water polo team heads into this season eager to show its mettle in an extremely competitive Conference. While the team may lack the experience of other teams in the conference, Head Coach Tyler Denize is confident in its abilities.

If early season practices are any indication, Coach Denize has good reason to be optimistic. “I’m so happy with how hard they are competing, and how intense practices have been,” said Denize. “I tried to kick their butts in a leg set, and did, but then they went out and had the best scrimmage all season.”

The Bear Cubs will need to summon every ounce of tenacity as they kick off the season with three road tournaments during September alone. While such a road heavy early schedule is tough, the team looks forward to the challenge.

Coach Denize hopes his team will be playing well into November fighting for the Northern California Championship. More important than wins and losses, Denize is simply looking for the maximum from his players. “I want us all to be able to look each other in the eye at the conclusion of this season and be able to say without hesitation that we gave each other everything we had.”

On the women’s side…

As the summer heat reaches its peak, the Santa Rosa Junior College women’s water polo team aims to cool off the competition.

Led by second-year head coach Chelsea Hennan, the team has a fresh look to it, featuring 10 freshman on a 12-man roster. Returning players Ivylee Senn and Dulcie Manchenton, who Hennan describes as “a small power-pack with a great outside shot,” will anchor a Bear Cub team looking to improve on last year’s 9-16 overall record.

The Bear Cubs begin the season with a bang, playing back-to-back double headers at the American River Tournament in Sacramento. In the words of Coach Hennan, “I really like the idea of going big; we don’t ease our way into the season.”

Serving Up A Storm

With the first game of the season only a few days away, the SRJC Bear Cubs volleyball team is looking to overcome a brutal loss against Foothill in the first round of the playoffs last season.

The roster features eight true freshmen, meaning the Bear Cubs have their work cut out for them if they hope to stay competitive this season.

Bear Cubs head coach Kaitlin Ferguson talked about the challenges presented by the college game. “The schedule is more demanding and it’s a much longer season than in high school. It’s also very mentally and physically fatiguing.”

With so many young athletes on the roster the team has no featured stars, heightening the chances of a true freshman taking on a starring role early in the season.

Although Coach Ferguson has a winning attitude, her focus reaches beyond wins and losses.

“I always want to make sure that I am developing successful players as people. Our overall goal is to go as far as we can and work as hard as we can.”

The Bear Cubs open up their season Wednesday, Sept. 2 with a home doubleheader against Redwood at 1 p.m. and San Jose City College at 5 p.m.