Tom Francois: The story of a man with heart, ambition, faith and inspiration 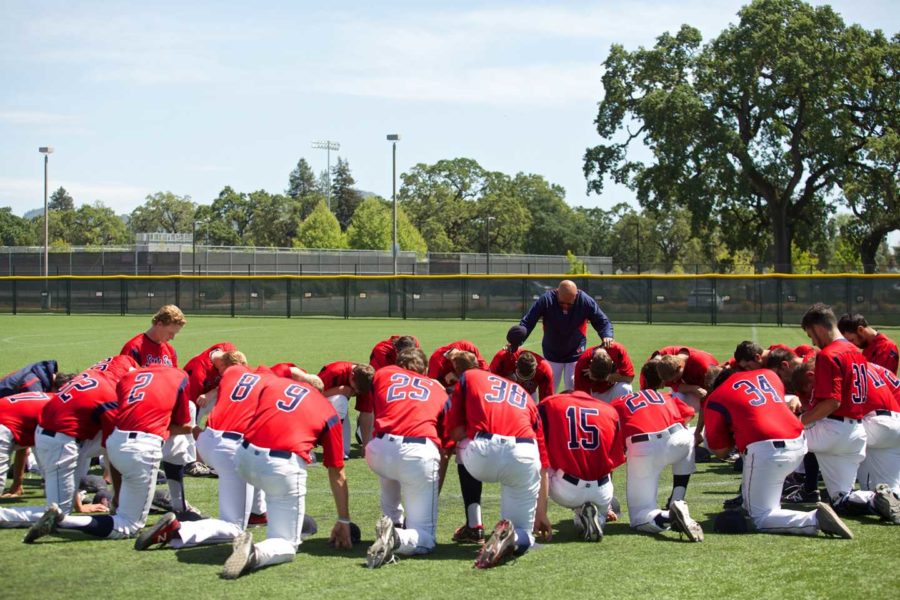 Tom Francois bows his head, along with SRJC Baseball in a moment of reflection before the final regular season game of 2015, against Sierra College April 24 at Sypher Field.

Take a walk out to Santa Rosa Junior College’s Sypher field, during practice or a game and you will probably see an elderly man wearing glasses and a ball cap, sitting on top of a bucket of baseballs, with a baseball uniform that covers up a part of him that would never be suspected unless known about.

Tom Francois, 74, is in his sixth year of coaching the Bear Cubs baseball team. A humble man, and definite people person,  Francois has a prosthetic leg and a pretty good sense of humor when it comes to his missing leg. “An alligator bit it off,” he said.

Francois is one of five baseball coaches and arguably one of the most beloved.

“Tom is the type of guy that instantly brings a smile to your face when you see him,” said Bear Cubs second baseman Michael Reynolds.

Francois began his baseball coaching career at Montgomery High School. He coached for three years prior to coaching for SRJC.

To this day he doesn’t regret his decision.

“He loves being out there with us and we love having him out there too,” said Bear Cubs pitcher Alec Rennard.

Francois said, “I wouldn’t want to be anywhere else. I’ve been asked to go to other places [coach other teams], but this is the place for me.”

Francois lost his leg due to a blood clot. He had noticed some discomfort in his leg after a friendly game of racquetball. The discomfort persisted for the next couple days and he decided to have it checked out. Sure enough, the doctor discovered clotting in his leg. Doctors performed a bypass and operated 12 more times in three months. Everything they tried failed.

The doctor and Francois knew it was time to remove his leg. Francois believed he could get his life back with the use of prosthetics. “My goal in life was to walk with a cane for the rest of my life,” he said. In 2001, they removed Francois’ leg.

He didn’t let this affect him. “I wanted the surgery to be completed as soon as it could be, so I could start the rehab quicker too,” he said. After an enormous amount of physical therapy, he began to walk again.

Francois is a spirtual man and a big believer in the power of prayer. “I prayed not for him to save it, but to point me in the direction I need to go for the rest of my life,” he said. “I woke up on that day of surgery with a calmness and peace that I had never experienced before.”

He believed God’s message was to not be afraid and that God would be with him every step of the way.

“I didn’t feel any regret or remorse when I looked down and saw it was gone. I felt relief, but I knew to get my life back it would be a lot of work,” Francois said.

Francois started to notice results from his hard work and dedication to walk again with a prosthetic leg. He was even nominated to carry the Olympic Torch. “I was beginning to be accepted. I carried the torch in San Jose two-tenths of a mile,” he said.

He was asked to share his experiences with school children, churches, fellowships, service organizations, colleges and high schools.

“I knew then what my purpose in life was,” Francois said. “It was to deliver a message of hope.”

To this day Francois gives motivational speeches and does his best to inspire his friends, family, players and just about anyone that they can do anything they want to.

“I have a great deal of respect for him [Francois], and I believe he helps bring everybody on the team close together,” Rennard said. “He is one of the nicest guys I’ve ever met.”