The offseason:Raiders, 49ers changes make upcoming season worth the wait 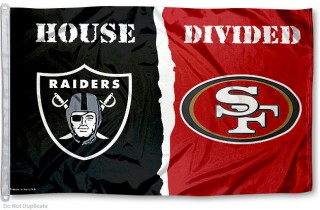 The NFL’s 2015 offseason officially began Feb. 1, the moment Malcolm Butler made the game-winning Super Bowl interception on the 1-yard line. Since then, almost every team in the NFL has made some changes to its coaching staff or its roster— especially teams in the Bay Area.

This year’s San Francisco 49ers’ offseason was the worst in franchise history. The 49ers went from head coach Jim Harbaugh, who took them to three NFC Championship games and a Super Bowl over a four-year period, to present head coach Jim Tomsula, whose only head coaching experience comes from a European football team in 2006. Granted, he’s been with the team since 2007 as the defensive line coach before his promotion.

But how can fans of a team that has experienced so much recent success, put their trust behind a man with such little experience? The 49er faithful will need a lot of faith to stay positive.

The 49ers lost key players on both offense and defense during the offseason. These players include: linebackers Patrick Willis (retired) and Chris Borland (retired), running back Frank Gore and wide receiver Stevie Johnson. Even with these huge blows to the roster, the 49ers are still a scary team with a great defense and a good quarterback who still has room to grow. The 49ers are a team to watch and not count out when discussing the playoff race for the 2015 season.

Across the Bay, another NFL team has made some much needed offseason moves. The Oakland Raiders, a once powerful franchise, has been irrelevant since the 2003 season. The Raiders are headed back to relevance with moves made last year, such as the pickup of quarterback Derek Carr and outside linebacker Khalil Mack in the 2014 draft.

Raiders fans are hopeful their franchise can turn things around this upcoming season. During the offseason, the Raiders have made changes to both their coaching staff and their roster. The Raiders’ new head coach will be Jack Del Rio, who has past experience as a head coach (Jacksonville Jaguars, 2003-11) and also as a defensive coordinator (Denver Broncos, 2012-14).

The Raiders have also made changes to their roster. They let go of a few key players: safety Tyvon Branch, defensive end LaMarr Woodley and LB Nick Roach. They were able to resign future Hall of Famer S. Charles Woodson and new signings such as: center Rodney Hudson from the Chiefs, LB Malcolm Smith from the Seahawks and LB Curtis Lofton from the Saints.

Just like last year, the outcome of the 2015 draft will either make or break the Raiders’ chances to be real contenders.

Will the Raiders draft a dominant WR such as Amari Cooper (Alabama) or Kevin White (West Virginia) to give quarterback Derek Carr another weapon? Or will general manager Reggie Mackenzie beef up the defense with DE Leonard Williams from USC if he is still available?

It won’t be impossible for the Raiders to make the playoffs next season, but with teams like the Denver Broncos, Kansas City Chiefs and the San Diego Chargers in their division, the chances are slim against them.

We can’t foretell each team’s new season outcome. The 49ers’ coaching staff could turn out to be a disaster and and the key losses to their roster could drop them below .500. Kaepernick and the 49er defense could also rise to the challenge and win their division, as they have many times before. The Raiders may end up with another losing season due to poor defense and bad coaching, or stun the NFL with a record over .500.
It’s safe to say fans of both the 49ers and the Raiders are excited and optimistic about the 2015 NFL season.