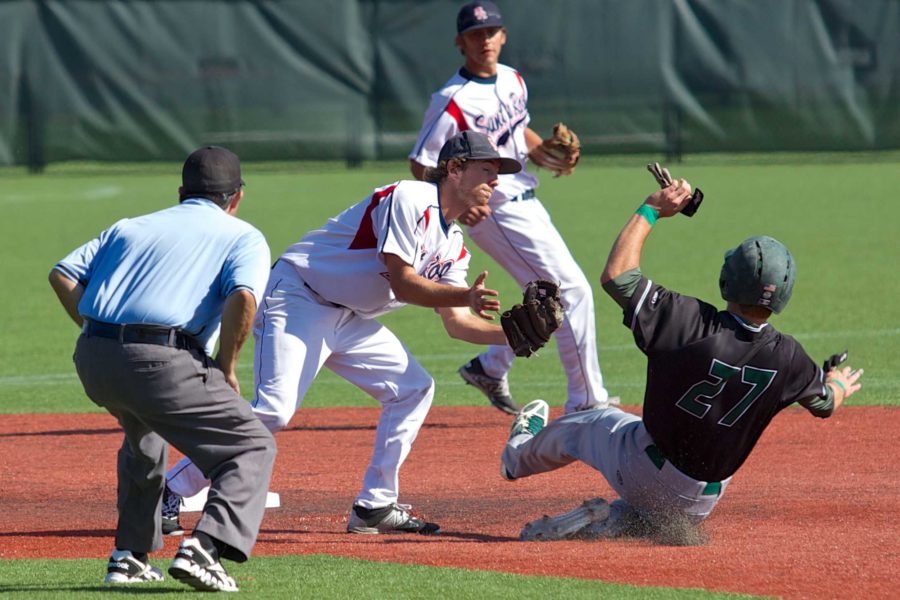 SRJC shortstop Mike Reynolds tags out DVC's Ryan Meisenheimer attempting to steal second base with a perfect throw from back-up catcher Jackson Leslie March 5 at Sypher Field Santa Rosa. The Bear Cubs would win the game with a final score of 4-1.

Despite leaving 13 runners on base, the Santa Rosa Junior College baseball team sent the Diablo Valley Vikings paddling back to Pleasant Hill in their 4-1 defeat March 5.

The game started strong for SRJC pitcher Garrett Hill, who put batters down one-two-three in the first inning. The bats started hot when Ryan Haug doubled down the third baseline. Then, Weston Bryan later drove in a double.

Hill mowed down batters through the second and third innings; however, SRJC’s offense also stalled leaving four runners on base without scoring.

“We just need to keep sticking to the process, watching the game to see how they are throwing. Just keep getting better in practice and learn from our mistakes and just keep getting on base,” Haug said about leaving runners on base.

In the fourth inning Hill got into trouble, giving up a leadoff double and walking two players to load the bases with no outs. But Hill buckled down, only giving up one run while striking out two to get out of the inning relatively unscathed.

“Once they got loaded I just focused on throwing every pitch to the right spot,” Hill said. “Luckily I got my job done as best I could.”

With a 1-1 tie, SRJC brought the bats out in the bottom of the fourth. After Jack Leslie scored on a Michael Reynolds ground out, Bryce Nagata came up with runners at the corners. Nagata fouled off six pitches in an epic plate battle, before finding a hole to the left side of the infield to drive in Jake Hedrick for a RBI single and 3-1 lead.

Hill’s day was done after the sixth inning, giving up only two hits, one run and five strikeouts. Matt Becker took the mound in the seventh and was lights out in the final three innings, striking out seven of 10 batters.

“I try to locate my pitches as best I can and change speeds,” Hill said. “For the most part I was able to do that pretty well.”

SRJC put another run on the board in the eighth on a passed ball, for a 4-1 final score. Nagata finished the game two for three, with one run, one RBI and a stolen base. Haug finished two for four, with a double, a walk and a run scored.

“It all starts with a plan. You have to walk up to the plate with confidence and get a pitch to hit hard,” Haug said. “It’s mine and the teams job to get on base anyway we can.”