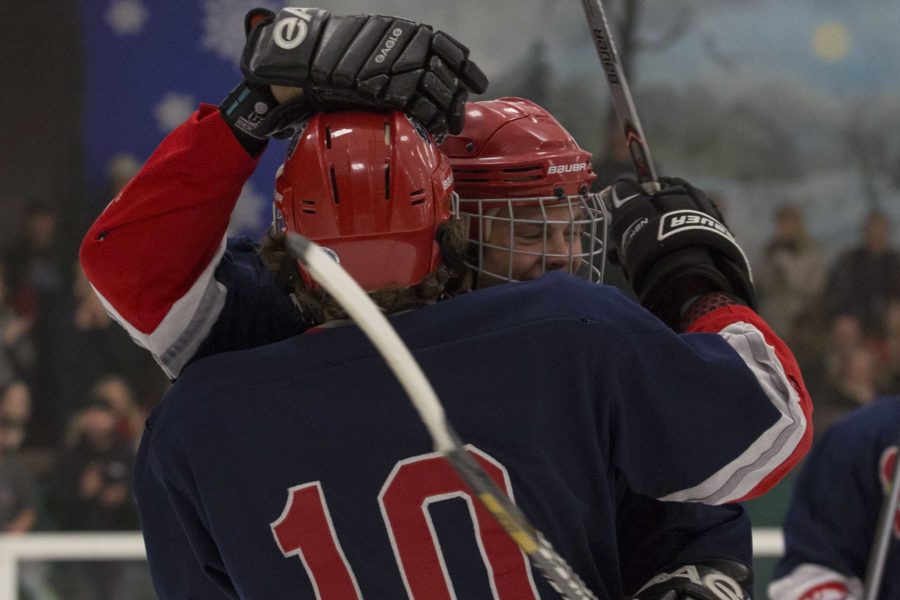 In a packed house with standing room only, fans lined up around the glass like Pliny the Younger was on the ice Feb. 7 at Snoopy’s Home Ice Arena to see Santa Rosa Junior College’s last hockey game of the 2014-15 regular season.

The Polar Bears wanted to end the season with a ruckus, and that is exactly what they did against San Jose State’s Division III squad, soundly defeating the Spartans 14-2.

The game started a little slow, despite the turnout and the beating SRJC put on them the last time the teams met. It wasn’t until 13:45 in the first period when Josiah Nikkel found the hole in the dam, and broke it. Nine seconds later Matt Katicich followed with a puck into the back of the net, and 18 seconds later Andrew Mason put another one in. By the end of the first period, the Polar Bears were up 9-0.

“It was amazing to have the turnout we did,” said Polar Bear Stephen Wolmarans. “I think that was probably the most packed arena and the livest arena that I have ever had the pleasure of playing in.”

As offensively heavy as the first period was, the Polar Bears remained relatively silent in the second period. SRJC netted only two goals, one off the stick of Wolmarans and defensemen Colin Ridenour’s second goal of the night. The team tacked on three more goals in the third for the win.

“It was a great feeling to win the season closer at home in front of a packed barn. We came out and played a strong team game, got a quick lead and didn’t look back,” Katicich said.

The Polar Bears will likely face SJSU in their first game of the PCHA tournament.

“We swept the season series against SJSU, but we can’t overlook anything. We just have to go in there and play our game,” said defensemen Niklis Nisja.

Head coach Mike Kovanis echoed Nisja’s sentiments.
“I feel like there is some unfinished business,” Kovanis said. “The big thing is we are looking forward to most likely seeing [UC]Davis in the championship game. They’ve won the season series two of three games this year and I feel like we need to prove that we are the best team in the league once again and at least we will be able to do that when it matters, hopefully.”

Kovanis explained the plan for meeting Davis again and it sounded simple enough. The plan is to limit Davis’ two best players, but there’s a catch.

“They are really world-class players at our level,” Kovanis said. “It’s going be a challenge, but I think if we can control two of their guys and then capitalize when they aren’t on the ice that’s going be the difference of the game.”

With a 17-8-3 record, the Polar Bears are hopeful to bring the PCHA Championship title back home to Santa Rosa for a third straight time.

“Playing as a five-man unit when we are on the ice is going to really separate us,” Wolmarans said. “Get it deep and be physical, ‘cause they have a short bench and we need to make them feel it with the body.”