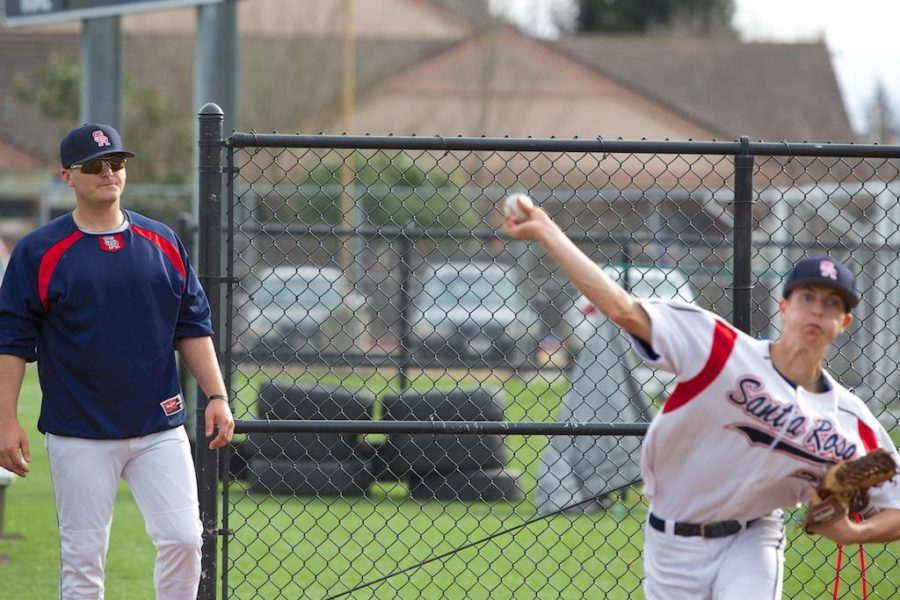 Jonathan Nadele observes Garret Hill take warm up pitches in the bullpen before coming in for relief against De Anza Feb. 5 at Sypher Field.

It was only four years ago that Jonathan Nadale laced up his spikes as a pitcher for the Santa Rosa Junior College baseball team. Now he is back on that same field, no longer a pitcher, but pitching coach.
Nadale pitched for the Bear Cubs from 2010 before transferring to Western Carolina College where he played from 2012. He is in his second season as the pitching coach for the Bear Cubs.

“It was a great feeling to be able to come back after my four-year college career, and be able to coach where it all started for me,” Nadale said. “It’s not too often that you see a former college player coach for the team he played for, let alone just four years later.”

SRJC baseball had a big impact on Nadale, not just in the sport, but also in his overall life.

“SRJC baseball not only made me a better player, but a better man in the process,” he said.

Nadale gives the Bear Cub pitchers guidance. He knows the school well, and has gone through the same process as them. This will be a huge help for a pitching staff full of first-year college pitchers. The relationship between a pitcher and pitching coach can elevate a player and lead to greater success both for the individual and the team. “Nadale works them hard and tough, but he does it because he knows what they are capable of,” said Bear Cubs catcher Ryan Haug, who works with Nadale and the pitchers in bullpen sessions.

“With there being younger guys you have to prep them for the speed of the game at this level and battle them,” Nadale said. “I think it helps them [current SRJC pitchers] because they know they have a coach that has been through the program and the Division I program as well.”

Haug commented, “I think it’s a bonus, because he has experienced it himself, he knows what it takes to be great and he understands the mentality.”

Nadale played under head coach Damon Neidlinger and is now his assistant coach. Nadale knows how Neidlinger runs his team and coaches. Along with that comes great chemistry among the coaching staff.

“I’m proud to say I’m one of his coaches,” Nadale said. He gives a lot of credit to Neidlinger, and has learned a lot from his former coach, both as a player and a coach.

“The great thing about him is that he knows so much about the game,” Nadale said. “I still am learning more everyday just on the coaching side.”

Nadale plans to move up in the coaching ranks.

“I aspire to be a Division I pitching coach in the future,” Nadale said. He hopes to lead the Bear Cubs back into the playoffs and get them geared up for a state title run.