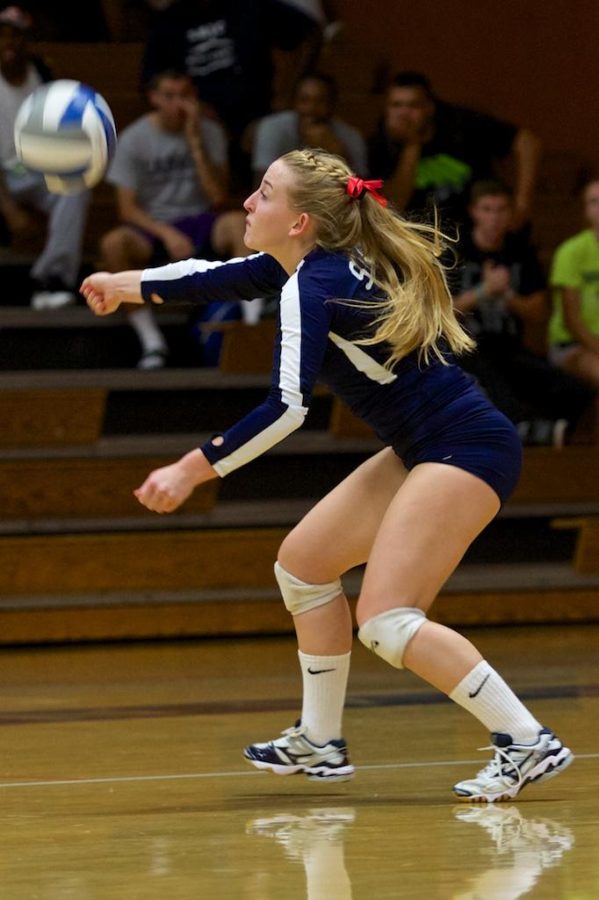 Bryce Gevas makes a one handed dig saving a point from being scored by Sierra College Oct. 8 in Haehl Pavilion Santa Rosa.

After posting an impressive record on the extensive road trip to begin the year, the Bear Cubs women’s voleyball team looked to continue their winning ways in its home opener against the Wolverines of Sierra College Oct. 8.

Entering the game, the Bear Cubs boasted an impressive 7-3 record, with all ten of those games having come on the road.

Though not ideal, head coach Kaitlyn Ferguson looked at the scheduling in a positive light. “Its important to get that experience on the road, because it is very difficult to have success on the road later on in the season,” she said. “Those road games really help to build mental toughness within a team.”

Both teams came out strong, trading points back and forth for the entire first set. The first set ultimately went to Sierra, 25-23, giving them a 1-0 advantage heading into the second set in the best of five.

The momentum began to shift towards the Bear Cubs at the end of the second set. With a slim lead, and a playoff atmosphere of a crowd behind them, the Bear Cubs found their stride to close out the set with a win.

“It was a great atmosphere, a playoff atmosphere,” Ferguson said. “We have had good support from fans thus far on the road, but it was really great to see the fans come out in the numbers they did.”

Despite Sierra’s attempt to climb back into the second set, the Bear Cubs stayed strong and won 25-20, tying the match at one set apiece.

The momentum continued into the third set, as the Bear Cubs seemed to be in complete control. They jumped out to a 5-0 lead to start the set, and never looked back. They also controlled an 18-8 lead later on in the set.

The third set concluded with a surge from the Wolverines, bringing the set to a score of 21-18. But the Bear Cubs stayed focused and closed out the set on a 4-0 run to put them one set away from a match victory.

But, when the fourth set started, the momentum shifted rapidly to Sierra and it seemed like a different game. They took control of the set, aided by a key injury to freshman Bear Cub setter Emily Bonfigli. She collided with a teammate attempting a dig, and was removed from the game.

Despite trailing 23-18 at the end of the set, the Bear Cubs showed a lot of heart in their efforts.

They stormed back to tie the set at 24 and took a 25-24 lead, much to the delight of the large home crowd. However, the Wolverines won the next two points, winning the set and tying the match at two games apiece. After being just one point away from a match victory, the loss in this set was tough.

“The collision and subsequent substitutions definitely affected us, but it was a test of mental toughness if anything,” Ferguson said.

The final set, which played to only 15 points, was in Sierra’s control from the first serve. The Bear Cubs fell behind quickly and were unable to recover, losing the set 15-7.

Despite the loss, Ferguson remains upbeat. “It was a tough loss, but we showed great mental toughness to come back at the end of the fourth set. Unfortunately, that same toughness just wasn’t there in the fifth.” Ferguson noted that she has seen growth in every game this season, and this one was no different. “I think we played pretty well. We successfully implemented a lot of things that we have worked on in practice, but the results didn’t play out exactly how we wanted them to. We made some mental mistakes, but showed a lot of heart and resilience to finish the game.”

The loss brings the Bear Cubs’ record to 7-4. Their next game takes place against Diablo Valley College at 6:30 p.m. Oct. 10 in Pleasant Hill.

With two more away games after DVC, the Bear Cubs return home 6:30 p.m. Oct. 22 against conference opponent Modesto Junior College and a lengthy home stand, with 9 of their last 13 games at Haehl Pavillion.