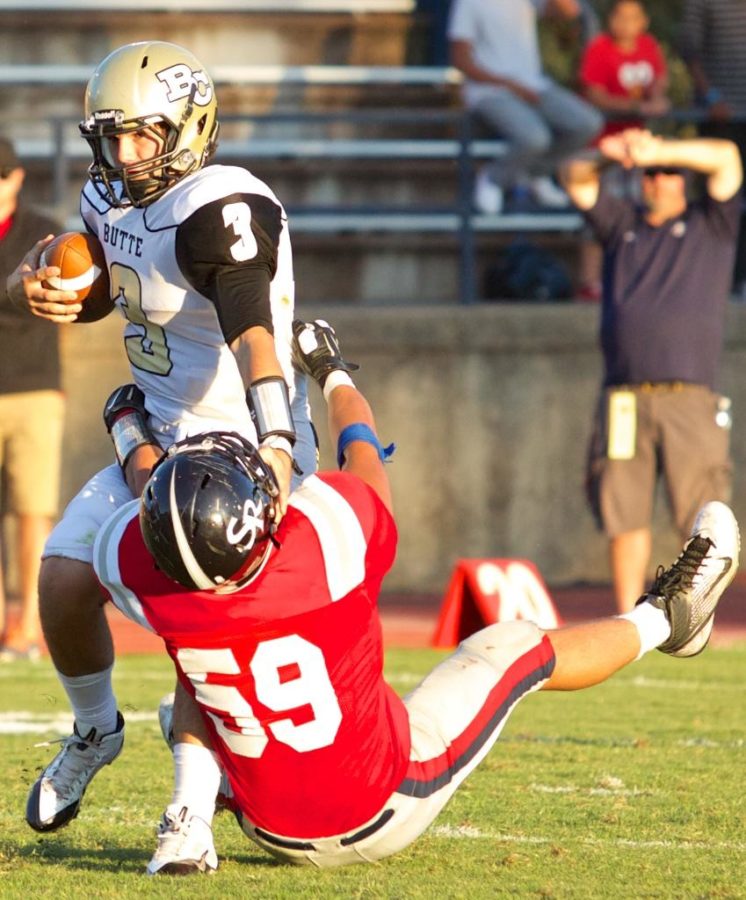 Amandoli graduated from Sonoma Valley High School in the spring of 2013, shortly after being crowned the Sonoma County League’s Defensive Player of the Year. As a PrepStar athlete, he also came up just short of earning a trip to the state tournament as a wrestler. Not to mention that he was highly regarded as one of the county’s top sprinters during the track season. This stud was born with a rare breed of athleticism.

At 6’2” and weighing 230 pounds, Amandoli is a physical specimen — a term delicately bestowed on only rare occurrences like J.J. Watt, Lebron and Colin Kaepernick — and Amandoli is that special.

However, Amandoli came to a crossroads in between high school football and college when he began contemplating to give up one of his biggest talents: football

“I really wanted to focus on school, but at the same time I didn’t want my high school years of football to be my last,” Amandoli said. “Football is a great place to build bonds with teammates, and I’ve been lucky enough to join the JC’s football family.”

Amandoli, a redshirt freshman, found himself making an immediate impact on the revamped Bear Cubs’ defense. Starting at defensive end, it isn’t often that No. 59 is on the sideline. He is a force on the defensive line that is just beginning to become acclimated to the fast pace of collegiate football.

After being an integral part of many relatively unsuccessful Sonoma High football teams, Amandoli said, “It feels good being a part of a winning team here at the JC.”

Amandoli isn’t looking past SRJC quite yet.

“Right now I’m just taking things week by week, and preparing myself as best I can to maximize my performance this upcoming week,” Amandoli said. “But I plan on adding around 20 pounds of muscle this offseason to better prepare me for next year.”

Coach Wagner agreed. “His lone weakness is his size. He needs to have another great off-season in the weight room in order to take his game to the next level,” he said.

The offseason for the team typically involves very limited organized team activities, designed to allow players to rest and recover their bodies from the treacherous workload endured throughout the season. For Amandoli, perhaps the most intense time of the year for him is the offseason.

“John is a blue collar worker. He punches the clock everyday and is always working to improve both his on and off the field abilities,” Wagner said.

“My [offseason] training regimen is very intense and time-consuming, and I am willing to sacrifice whatever it takes to be the best football player I can be,” Amandoli said.

While the SRJC football team is often criticized for being “undersized,” the football program’s philosophy is predicated on making up for its smaller team with players who are faster and stronger than their rivals.

While his numbers aren’t exactly eye-popping, Amandoli’s contributions can’t be defined through statistics. Whether it’s getting pressure on the quarterback or plugging a hole in the trenches, Amandoli has quickly emerged as one of the defense’s most valuable players. He has two sacks on this year so far, settling in as one of the most dominant and versatile defensive ends in the conference. With his unique abilities to both rush the passer and stop the run, he will most certainly draw attention from numerous Division I schools as he moves forth.

Amandoli said he would like to see more of the student body come out and support the team.