Bear Cubs keep rolling in shutout against College of the Redwoods; fourth in Big 8 play 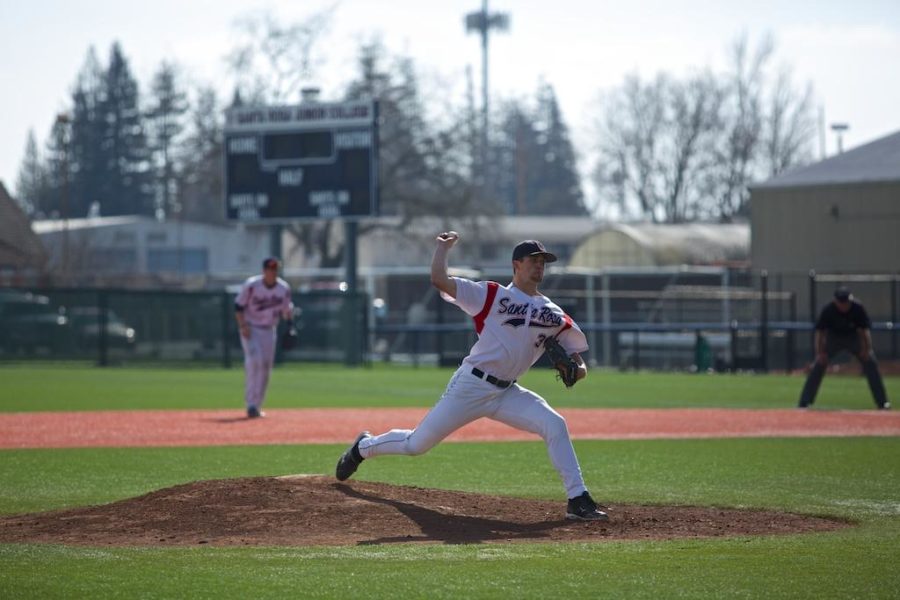 Brandon Hagerla finishes seven and two-thirds innings allowing only three hits and a walk for a shutout against College of the Redwoods batters Feb. 25 at Cook Sypher Field Santa Rosa.

The Santa Rosa Junior College Bear Cubs shut out College of the Redwoods 5-0 Tuesday behind a stellar pitching performance from Brandon Hagerla.

The game was scoreless until the fourth inning, when Chase Stafford doubled down the right field line. Bryan Weston followed up with another double to give the Bear Cubs the first run of the day.

An error by Redwoods’ pitcher Justin Hatch allowed Dane Erbst to reach first base on what was supposed to be a sacrifice bunt, which also allowed Weston to advance to third. Weston scored on Anthony Bender’s single to right field, making the score 2-0 Bear Cubs.

On an interference call, Spencer Nave was awarded first base, loading the bases for designated hitter Dylan Eterovich. He reached on a fielder’s choice, producing another RBI.

The next batter, third baseman Mike Reynolds added a sac fly to make the score 4-0 in favor of the Bear Cubs. In that inning alone, SRJC scored four runs on four hits, along with the error by Hatch.

The Bear Cubs added an insurance run in the seventh inning.

With Matt LaCoco on third, Stafford came through again to extend the lead to 5-0. Bear Cubs’ reliever J.J. Jamerson brought the win home when he pitched the final one-and-one-third innings.

“You know it was just one of those days where I was seeing the ball well,” second baseman Stafford said. “Hagerla threw a gem to keep us in the game and it was just a matter of our offense producing enough runs to get the win.”

The Bear Cubs scored five runs on nine hits with no errors. Nine hits with one walk were certainly enough to get it done.

This is the eighth win for the Bear Cubs. They are now fourth in the Big 8 Conference.

“It was a great team win for us to get better,” Stafford said.