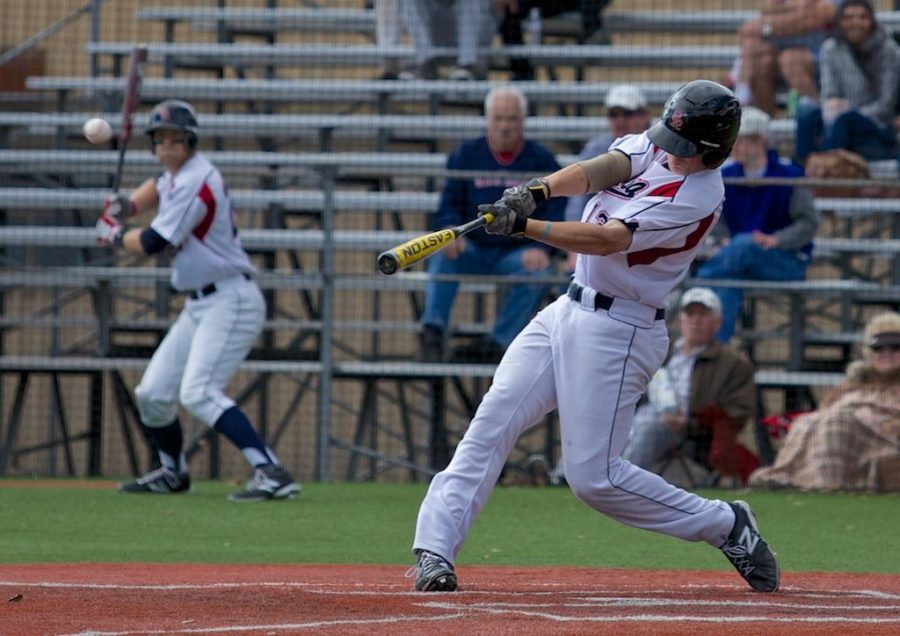 Bryan Weston almost knocks the skin off the ball for an RBI triple against Napa Valley March 1 at Sypher Field Santa Rosa.

The Bear Cubs baseball team improved its overall record to 9-2 after a win at home against Napa Valley March 1.

Things did not look good for Santa Rosa early as the basis were loaded for Napa’s designated hitter Ignacio Diaz.  Diaz singled in the first run of the day, leaving the bases still loaded with nobody out.

That was all the damage Santa Rosa pitcher Brett Obranovich allowed in that inning, thanks to some stellar Bear Cubs defense.  A double play on the infield and a pop-up prevented any further Napa scoring in that inning.

The Bear Cubs responded in the bottom of the first inning when Weston Bryan tripled, bringing around third baseman Martin to tie the score at 1.

The next batter, left fielder Dane Erbst, singled in Bryan to give the Bear Cubs a 2-1 lead.

The Bear Cubs tacked on two more runs in the third inning.  A sac fly by Erbst and an RBI single by shortstop Anthony Bender put the Bear Cubs up 4-1.  Catcher Spencer Neve would also score from third when center fielder Matt LaCocco grounded into a 6-4-3 double play, making the score 5-1 Bear Cubs.

Jamerson put in the majority of the work for the Bear Cubs, giving up just one run on five hits in five innings of work.

Napa Valley scored one more run in the top of the eighth inning, but that was all they could manage as SRJC pitcher Vijay Patel pitched the final one and two-thirds innings to secure the victory.

The Bear Cubs’ next two games are at home at 2 p.m. March 4 against Yuba College and 2 p.m. March 6 against Mendocino College, both on Cook Sypher Field.