Don’t call it a comeback: Bear Cubs advance in playoffs 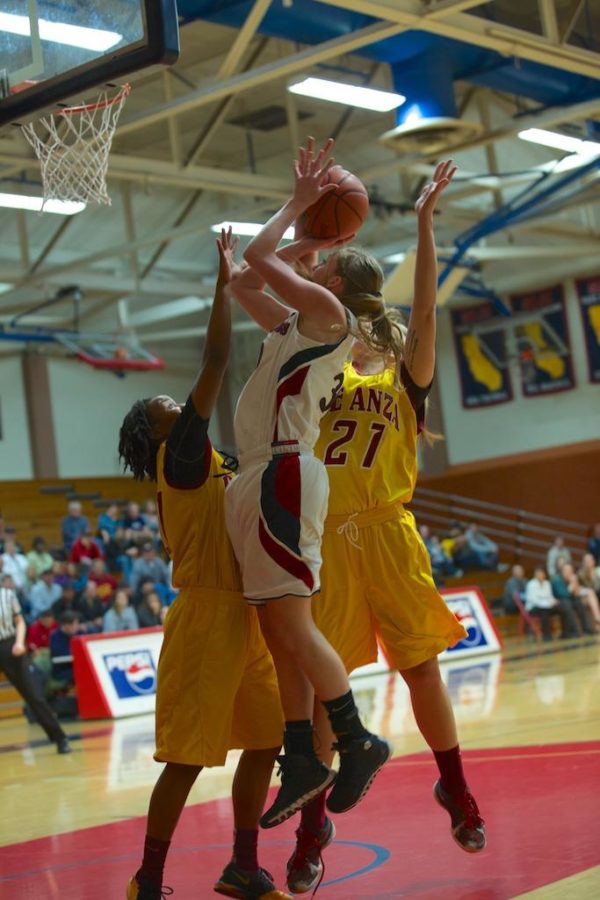 Gretchen Harrigan shoots over the stingy defense De Anza College in Round 2 of the playoffs Feb. 28 in Haehl Gym Santa Rosa.

Down by 11 points starting the second half, the strong playing of point guard Stephanie Sack and Gretchen Harrigan led the Bear Cubs to victory as Santa Rosa Junior College fought back to beat De Anza College 60-52 to advance to the third round of the Northern California Regional playoffs Friday at Haehl Pavillion.

“We all came together and said that if we don’t play together as a team and play our hardest this would be the last 20 minutes of our season,” Sack said. “And none of us wanted that.”

Sack made the second of her four 3-pointers 2 minutes into the second half to cut De Anza’s lead down to 39-27.

One minute later De Anza increased its lead back to 14, the biggest lead of the second half.

The Bear Cubs forced De Anza to turn the ball over on each of its next three possessions. Following the turnovers came a layup from freshman forward Alicia Mehtlan, a layup from freshman guard Gretchen Harrigan and a 3-pointer fromHarrigan to make the score 41-34 with 14:30 to play in the game.

After a missed layup from De Anza, Harrigan converted two free throws to bring the Bear Cubs within five points of their opponent.

Down by 4 points with just over 11 minutes remaining Sack made two 3-pointers on back-to-back possessions to give the Bear Cubs a 46-44 lead.

“The intensity of our team picked up and our defense was doing a lot better which was fueling our offense,” Sack said. “My teammates and I were working the ball around and had some good assists.”

The Bear Cubs held De Anza to just 20 points in the second half.

The Bear Cubs offense struggled to start the game, making just one of their first 11 shots and missing all four 3-pointers taken. They scored just 4 points in the first 7.5 minutes of play.

Mehtlan scored the game’s first point with a free throw and later made a layup from an offensive rebound. Harrigan added the other free throw.

After De Anza’s lead grew to 25-10, the bear Cubs switched to a zone defense and outscored the Dons 11-7 to end the half.

Sack made the Bear Cubs’ first three, after the team missed their first seven attempts, to make the score 25-14 with 3:30 left in the half. She finished the game with 16 points, fourassists, three rebounds, two steals and a blocked shot.

Harrigan had a typical game with 26 points, 13 rebounds, four assists, three steals and a blocked shot.

Mehtlan had 10 points, seven rebounds and a blocked shot.

The Bear Cubs will host Diablo Valley College in the third round of the Northern California Regional playoffs March 5 at 5:30 p.m. in Haehl Pavilion.