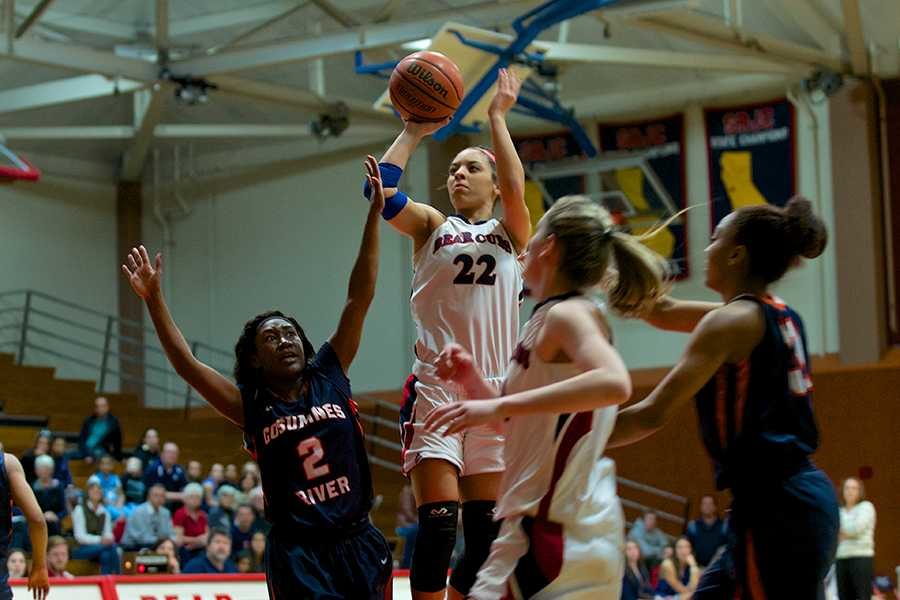 Will Mathis and Nate Voge

The women’s basketball team defeated Cosumnes River College 61-49 Feb. 21 to end the regular season, and now focus on the state playoffs. The first playoff game will be Feb. 28 or March 1.

Since then the Bear Cubs lost to No. 11 Diablo Valley College and beat No. 10 Consumes River.

A top four seed would guarantee the Bear Cubs’ home court advantage through the first two rounds, but the women’s team knows there is no point in worrying over something that is out of their control.

“We focus on one team, one game, one goal,” said sophomore guard Madison Sowards. “For us to get to state, we need to play together, focused and want it.”

SRJC had playoff success in recent years. After winning the 2011 state championship, it advanced to the Northern California semifinals in 2012 and the state semifinals in 2013 before losing.

“[We] fought very hard last year to get to the final four,” Sowards said. “Losing that game only brought us closer.”

Eighteen teams make the Northern California Regional Playoffs. The last four play in the first round while the rest automatically advance .

The 15-team Northern California poll indicates who will possibly be making the playoffs. The Bear Cubs have a 10-7 record against teams ranked in the final poll. They lost to top-ranked Fresno City College 81-76 Dec. 29 in the San Jose City College Invitational championship game. They won two out of three games with Big 8 conference champion and second-ranked San Joaquin Delta College. They lost to third-ranked City College of San Francisco 69-44 in the second round of the SRJC tournament Dec. 14.

Big 8 conference rival Sierra College rounds out the top five. The Bear Cubs won two of three against them.

“Making it to the tournament last year just makes me want it so much more,” said sophomore point guard Stephanie Sack. “You put in all this work knowing that this could potentially be your last game.”

The Bear Cubs took on potential playoff opponent Cosumnes River College Friday night at Haehl Pavillion. The state’s leading scorer, Bear Cubs forward Gretchen Harrigan, scored 20 of her 30 points in the first half in the team’s 61-49 victory. She also had seven rebounds and four blocked shots.

“Sophomore night is always an emotional night,” Sack said. “Realizing how quickly these past two years have gone. Once you get on the court though you put all the emotions aside and just go out and play like it’s an everyday kind of game.”

SRJC had a 16-point lead midway through the first half, but Diablo Valley’s fast play and solid rebounding brought the team back in the game.

Diablo Valley missed the front end of a one-and-one up by one point with five seconds left. The Bear Cubs got the rebound and threw it down the length of the court. They got the ball to Harrigan, who spun around the defender and made the potential game-winning layup after time expired.

The 65-64 loss dropped the Bear Cubs out of first place in the Big 8. This is the first year the Bear Cubs have not won the Big 8 since the 2008-09 season. Their 11-3 conference record put them one game behind San Joaquin Delta.

The Santa Rosa Junior College men’s basketball team walked off the court as Big 8 champions after a win last Friday in their last conference game.

“Two years in a row,” said sophomore forward Brian Johnson with a smile.

Winning the league outright is not only bragging rights, but guaranteesat least two home games for the Bear Cubs in the post season.

“I think in my career I’ve lost one home game at this gym,” said team captain Alec Kobre, who finished the season averaging 13.7 points.

“We’re going to have a couple home games; we have got to make sure we win those,” Kobre said.

Guards Matt Hayes and Davone Oliver combined for 29 of SRJC’s 39 second-half points, sinking three 3-pointers each in that game. SRJC won the game 64-53.

Hayes dropped 22 points in the game on Friday and finished fourth in the Big 8 in scoring, averaging 16.1 points.

“At the beginning of the season I started putting up a lot of shots, started going to his [coach’s] practices early in the morning and start shooting with my roommate to help me develop my shot more,” Hayes said.

In the first two minutes of the game on Friday the Bear Cubs couldn’t find the bottom of the net and gave up a 6-0 run to Cosumnes River College.

The run ended promptly when Johnson blocked a shot; then Kobre went down and sunk a 3-pointer in the next possession. The quick change in momentum brought the house down and the crowd roared as CRC took a timeout to slow down the Bear Cubs.

“I think we may have been a little excited for the stage, the big crown,” head coach Craig McMillan said. “Once we settled down I liked our execution.”

SRJC guards scored most of the points, but post players like Luke Cocheran and Corey Hammell rebounded, fought for position and set solid screens, allowing the guards to attack, pull up for jump shots and make passes.

“Those guys are the ones that get me open, I’ve got to thank them for setting good screens,” Kobre said. He and Hayes both scored 22 points on Friday.

“I thought the team defense was the key,” McMillan said.

The game ended with Kia Drewry dunking the last bucket for the 76-56 victory.