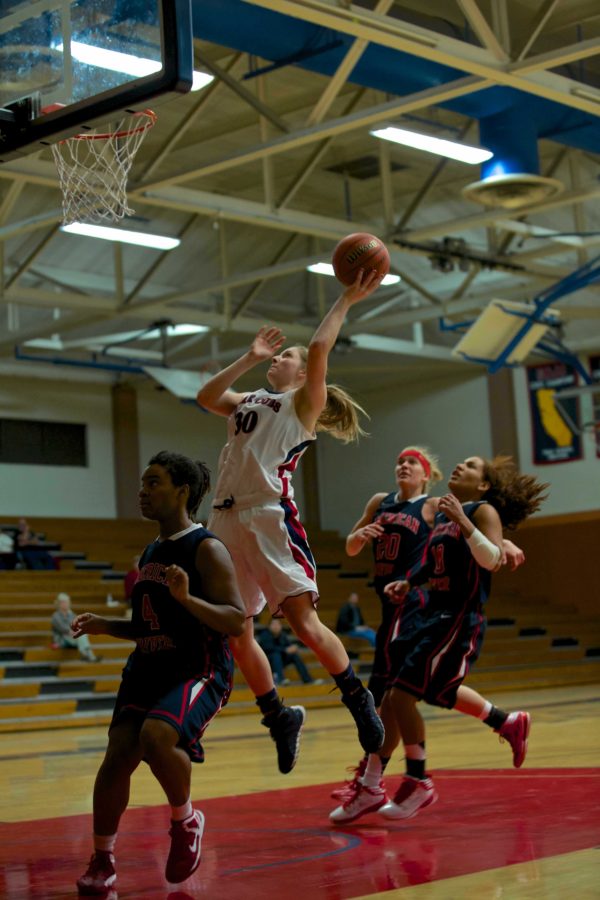 Gretchen Harrigan finishes a fast break for a basket against ARC Jan. 21 in Haehl Pavilion. The next home game is Jan. 31.

Bear Cub basketball fans had something to cheer about when the women’s team cruised to a 64-53 win against American River College Jan. 21.

SRJC’s game against its Big 8 Conference rival didn’t start out in the Bear Cub’s favor.

“It was a good lesson for us,” said head coach Lacey Campbell. “We play as a team. We’re not just one person.”

The Bear Cubs didn’t score for the first seven minutes of the game until starting point guard Stephanie Sack sunk a three-pointer, making the score 14-3.

The Beavers increased their lead with a layup from freshman guard Erica Bossett, but were held scoreless for the next eight minutes.

Bear Cubs center sophomore Erin Skinner made a free throw, then a layup on the next play to make the score 16-6 with 10:10 remaining in the half.

Harrigan re-entered the game for the Bear Cubs at this point and was immediately fouled.  She made the next two free throws and cut the lead down to eight.

Bear Cubs sophomore guard Madison Sowards’ layup brought the score to 16-10 with eight minutes left in the half.

The Beavers finally got back on the board with two free throws made by freshman guard Saria Loudon, making the score 18-10 with 7:36 left in the first half.

A three-pointer from Harrigan and a free throw from Sowards tied the game at 18. Sack then came up with a steal and scored to give the Bear Cubs their first lead, 20-18 with four minutes left to play in the half.

Harrigan scored four more to go along with a three-pointer from Sowards and a layup from freshman guard Alicia Mehtlan.

“We quit reacting and started playing more assertive,” Campbell said. “We had so much time left. We just needed to get back to being us.”

Matsunami called a timeout to attempt to slow down the fast-paced Santa Rosa offense, but a three-point play from Skinner, two free throws from Harrigan and another three-pointer from Sack pushed the lead to 58-43 with just 4:30 remaining.

The Beavers made it a nine-point game with 2:17 left, but the Bear Cubs ultimately cruised to a 64-53 victory.

Harrigan had a game-high 21 points (7/14), despite being in foul trouble most of the night, to go along with three rebounds, two steals and an assist.  Harrigan leads the Big 8 with her 53.8 shooting percentage.

Skinner finished the night with a double-double, scoring 14 points and grabbing 11 rebounds.

Sack had 13 points, five rebounds, a game-high four steals and five assists. She shot 50 percent (2-4) from three-point range. Sack is fourth in the conference with her 35.1 three-point shooting percentage.

The Bear Cubs’ next home game is against Modesto Junior College at 5:30 p.m. Jan. 31 in Tauzer Gymnasium.