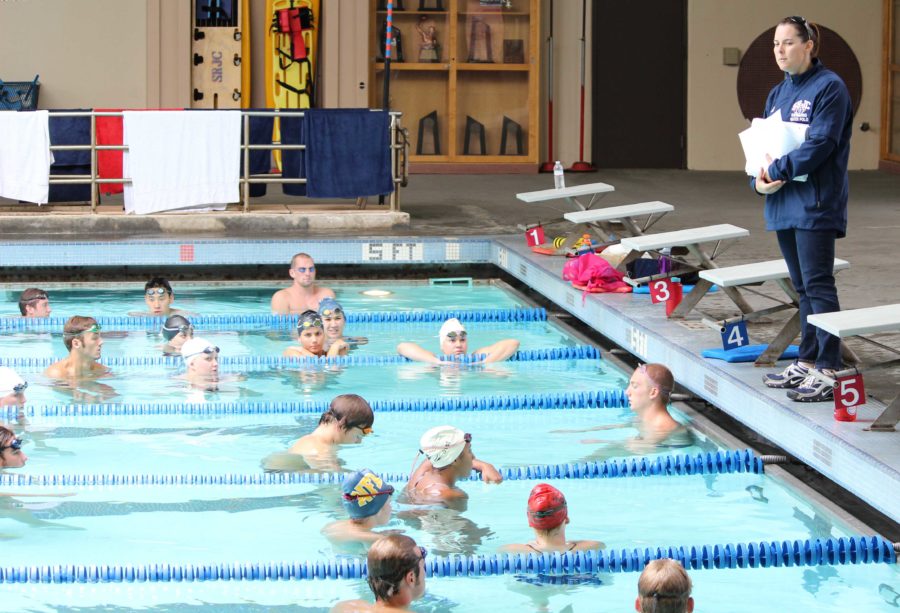 As the dust of March begins to settle, April brings forth two of the best teams Santa Rosa Junior College has to offer in the Men’s and Women’s Swim & Dive teams.

After an incredible start to the season, the women’s team shows no signs of stopping. The team roars toward the postseason with an undefeated record in conference and first place finishes in every scored invitational meet during the regular season.

In other words: the women don’t settle for second place and have all the talent in the world to continue making this a reality.

In previous years, when the swim team performed at a high level up to this point in the season, it ended with a state championship. And the women from the 2005, 2008 and 2009 teams would be the first ones to say so.

With this in mind, it’s easy for the team to start dreaming big despite nearly an entire month of swimming ahead.

“I think we’ve all been secretly thinking state, but right now we have to take care of the Big 8 conference and our upcoming meets,” said women’s swim captain Alex Holland. “A huge part of us winning state are our divers Casey Murdoch and Ari (Bates.)”

Freshman swimmer Erin Sullivan added, “Yeah we’re thinking it. We’re going to try our best because we know we’re definitely in the running, and as of right now we’re mainly focusing on the Big 8 (conference).”

After not having a diving team last year, diving captain Murdoch and freshmen diver Ariana Bates are the potential X factors to push the team over the edge for a title.

“I feel really good about our team. We work really hard day to day and we support each other,” Murdoch said. “It’s a great atmosphere to be in. There are some great teams out there who we feel like we can hang with.”

For a team to win the state championship, it must remain consistent in beating the teams it already defeated, as well as being prepared for teams it hasn’t faced at all.

“DVC [Diablo Valley College] and Golden West look really good,” Holland said. “There are a lot of Southern California teams coming up that we haven’t faced yet, and DVC is always good so they will be a good challenge for us.”

The men’s team had an up and down season compared to its state championship team from a year ago. The men’s team is 3-2 in conference and have finished top-5 in all of its invitational meets with no first place victories.

“We got some strong individual swimmers this year,” said men’s swim team captain Alex Xu. “We lost a lot of key pieces, so there is not as much talent this year than there was last year.”

The team may not be queued up for a repeat title this year, but the jury is still out on whether or not it can do some damage come post season time.

“The girls look like they’re going to win it all, and I think the guys’ team can finish top-3 or top-5,” Xu said.

Less than a month remains before the 2013 swim and dive season is in the books. The Bear Cubs will need to put in their best efforts during the latter portion of a long and hard-fought season.

If the cards continue to fall into place, SRJC may very well see another state championship in the not-so distant future.