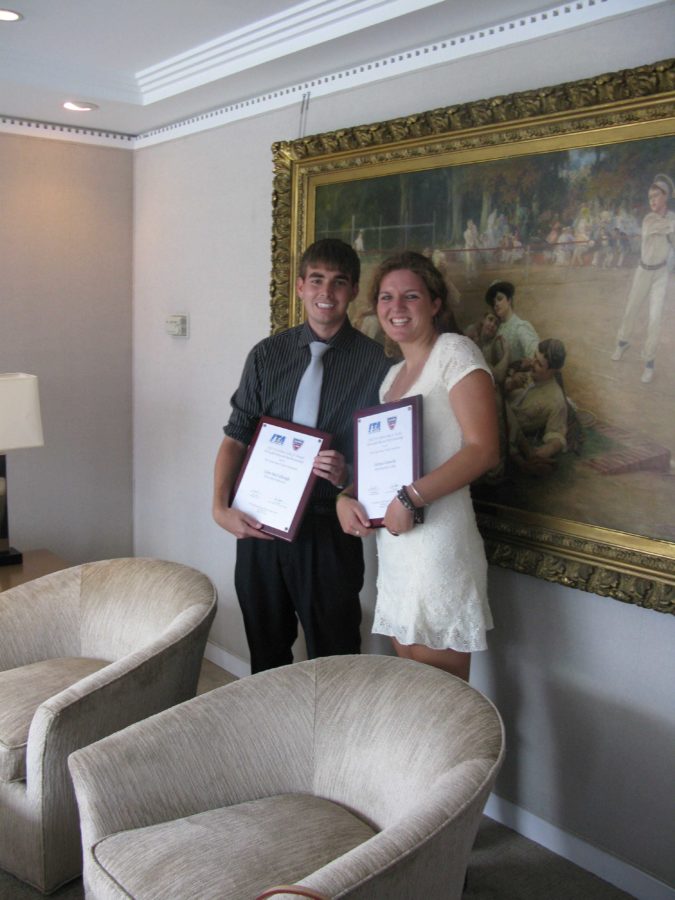 When SRJC student Gienna Gonnella steps on the tennis court, she takes on her opponent with the same passion and tenacity that she has for school and life. These traits are what helped Gonnella win the Arthur Ashe Leadership and Sportsmanship Award in May 2012.

“I was so shocked when I first found out I won. Being mentioned in the same sentence as Arthur Ashe is an incredible honor, and it’s been very humbling,” Gonnella said.

The Arthur Ashe Award is a representation of everything Ashe stood for – academic excellence, promoting tennis and being the best person you can.

This prestigious award is given to eight college recipients in the nation who demonstrate these Ashe-like standards.

Gonnella has played tennis since she was 10 and was the number one singles player at Ursuline High School. She has also played two full seasons at the varsity level for SRJC.

But it wasn’t just her tennis prowess that earned this award. Gonnella was a straight A student and has made great contributions to the community by organizing tennis camps for less fortunate kids.

“I wanted to help give kids the opportunity to play tennis that don’t have access to the sport,” Gonnella said. “Whether it’s because they struggled financially, or they never really heard of tennis before, I thought it would be great to give kids a chance to get involved in the sport,”

Gonnella and the other recipients were joined by friends and family at the U.S. Open in New York. The recipients attended the opening ceremonies and the Arthur Ashe kids’ day.

While in New York, the award winners received VIP tours of Arthur Ashe Stadium. There they walked down the hall of past champions and came within 10 feet of some pros in the players’ lounge. Gonnella said this gave her perspective on the importance of her achievement and a better understanding of what it means to be a tennis ambassador.

“It was totally surreal. Seeing all of these past champions in the hall was a very humbling experience,” Gonnella said. “The kids’ day was also really cool because it gave the kids a chance to play with the pros, its something they will never forget.”

Humble. This word alone could be the very definition of what Arthur Ashe was all about. That’s why it came as no surprise when Gonnella used the word “humbling” to summarize her experience as a whole.

As both a tennis player and a student, she strived for excellence as an athlete, while putting education and humanitarianism at the highest point on the priority list.

“Arthur Ashe was viewed as an ambassador to tennis. He believed tennis and education went hand in hand. Helping kids, raising awareness and promoting the sport is what made him who he is, and it’s an honor to receive an award in his name,” Gonnella said.