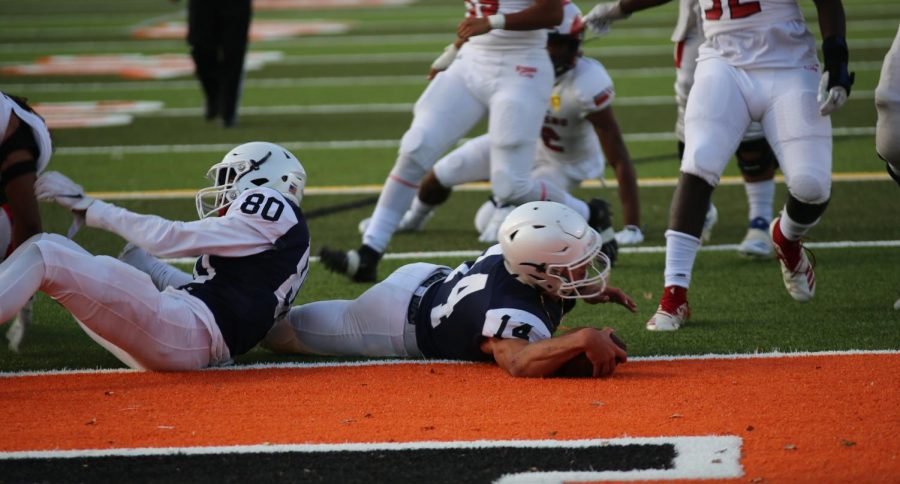 SRJC quarterback Will Heckman scores one of his two touchdowns during the Bear Cubs' home opener Saturday. SRJC fell to Fresno College 35-17.

The Bear Cubs subbed Will Heckman after starting quarterback Jhalen Grayer left the game with an injury. Offensive lineman Resheed Wallace also left the game in a cast. Heckman scored the team’s two touchdowns in the fourth quarter, the second with 27 seconds remaining.

After an early Fresno touchdown put the JC down 7-0, Santa Rosa scored a 35-yard field goal to keep the game close at 7-3. With a minute left until halftime, Fresno went up 14-3 and then stunned the Bear Cubs with a second touchdown to lead 21-3 at the half.

Fresno scored two more touchdowns, the first on a 20 yard pass in the third and the second on a run in the fourth for a score of 35-3 with less than 14 minutes remaining in the game.

Heckman’s two short but dramatic touchdown runs made it 35-17, but the game was already out of reach for the JC. Though the score wasn’t close, the Bear Cubs’ late-game energy electrified the crowd.

“I think for the first time in a few years, we showed that we can push people around a little bit and run the ball,” Assistant Coach Todd Little said. “We’ve got some playmakers on the outside, and it’s always the same thing from game one to game two, it’s cleaning up those mistakes and getting better.”

The Bear Cubs face Butte College at 1 p.m. Sept. 14 at Chico High School. Their next home game is versus Shasta College at 4 p.m. Sept. 21.