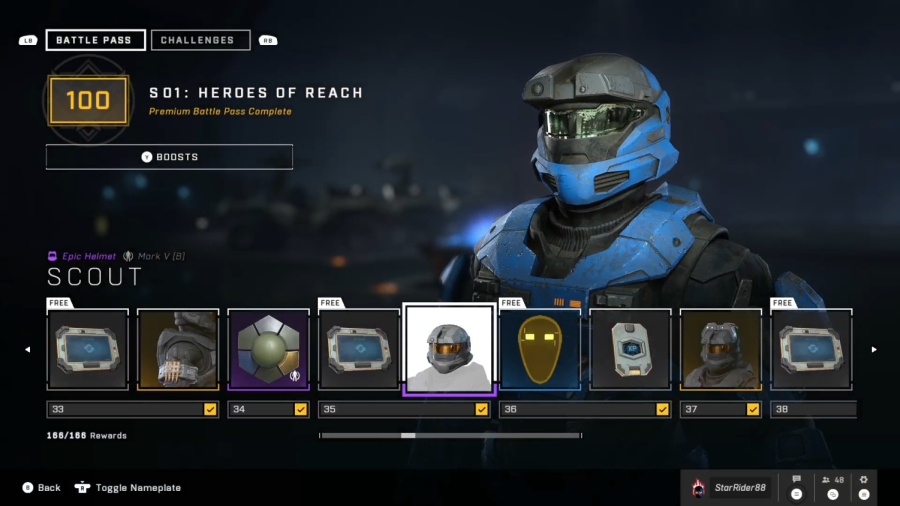 Halo Infinite's battle pass is free, but the majority of its rewards are behind a paywall, most of which were free through gameplay in every previous Halo game.

Ever since “Fortnite” dropped in 2017, battle passes have become a staple in “games-as-a-service” and free-to-play games. Conceptually, they work, but battle passes are becoming more disruptive as they become more prevalent.

A battle pass offers a free, tier-based progression system in free or cheap video games over a “season,” which usually last a few months, with most of those tiers offering some kind of cosmetic item with bonus rewards for a price, allowing a developer to make money off their game that otherwise would not bring in much or any profit.

Battle passes aren’t as bad as loot boxes, virtual boxes with a random reward often purchasable with real money, but they are just as obnoxious, especially in paid games.

Instead of just playing the game and earning rewards through progress, battle passes are limited and are replaced by a new one every few months. Players only have so much time to level up and get the rewards before the pass expires and they miss out. People refer to this artificially driven engagement as FOMO, short for fear of missing out.

The best example of a super disruptive battle pass system is in the game “Halo Infinite.” Unlike previous entries in the series, “Halo Infinite” forgoes the normal performance based progression system in favor of a battle pass. Instead of playing matches and performing well, players instead can only earn experience towards their progression through completing challenges, such as killing 20 players in a specific mode or playing a certain amount of a specific type of match.

This sounds okay in theory, but matches are unpredictable so something as simple as “win three games of Team Deathmatch” can take anywhere from one hour to four, depending on the teammates you get paired with. Rather than letting the player play how they want to earn rewards, they are now funneled into playing in ways they might not want to if they hope to progress in the season.

The game’s free battle pass alternative contains a mere fraction of the amount of rewards available in the game, despite developer 343 Industries promising “millions of customization options.” This is done to artificially drive player engagement through fear of missing out and bring in money selling items that were free in previous games, especially in “The Master Chief Collection.”

Games have always been about money, but these days it’s so blatant and heavy-handed. Battle passes need limited, seasonal content to keep players engaged because if they aren’t participating, they won’t get any rewards. There have been timed exclusive events in games before battle passes got popular, but they were much fewer and far in between, and it made the rewards for these events felt special.

At this point, it feels like there are more time-limited items in games than there are base-game items you can earn through gameplay. There is little respect for the players’ time in live service. This kind of thing would be fine if the game in question is free, but paid games having battle passes and all these limited events and items makes it feel more like a money-grabbing scheme than a game.

Even though battle passes are largely terrible these days, there are instances where they work and are valid forms of monetization. In games like “Fortnite”, the battle royale game is free to play and does not have any sort of paid gameplay advantages. Same with “Rocket League,” a free to play game about playing soccer with cars. While “Halo Infinite” is free to play too, the franchise has a 10 year precedent for not being free, so to have a main entry game with progression locked behind paywalls rubs a lot of people the wrong way.

Battle Passes are overall a cancer on the current era of AAA gaming. Games that once prided themselves on quality are prioritizing money over gameplay. Instead of relying on manipulative monetization, games should go back to providing everything at launch and any additional content be provided through DLC. Two new games that came out, “Elden Ring” and “Tiny Tina’s Wonderlands,” have shown this is possible. Both games launched as complete packages with no microtransactions, and are major successes. “Elden Ring” is seen as a Game of the Year contender, and “Tiny Tina’s Wonderlands” is the most well received “Borderlands” game since “Borderlands 2.”

“Halo Infinite,” launched with the least content in the entire series, with most of said content being $5.00-$20.00 cosmetic bundles on the item store, and now the game’s population is declining due to crippling lack of content for a live service title.

Battle Passes are a legitimate form of monetization for video games that don’t cost anything to play, but there are much less toxic and sustainable models for paid games that don’t have to involve butchering the experience or shamelessly raiding wallets.