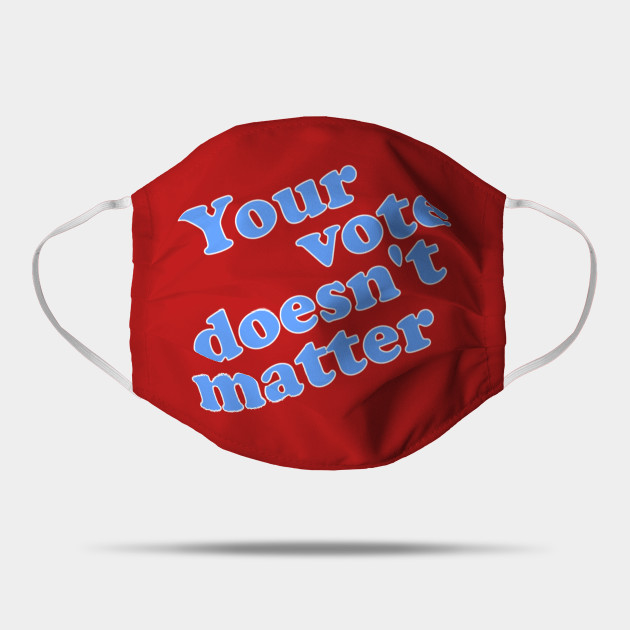 When your vote doesn't directly decide the winner of the Presidential election, does your vote still matter?

A former classmate of mine once told me, “Your vote doesn’t even matter. It’s the Electoral College that ultimately chooses our president.” As a young student, I was taken aback. His statement had me pondering the accuracy of his words because I couldn’t outright deny them.

I, and many other students, were just discovering politics and acquiring a keen interest in government for the first time. I hadn’t taken a political science course yet, and I was hoping my classmate was wrong. It’s a rather devastating realization that ‘we the people’ have no real influence on what happens in our democracy.

I drove home and went online to find as much information as I could about the electoral process in America. I wanted to see to what degree our votes do, or do not, matter toward the election of the president in a constitutional republic like the U.S. Here’s what I found:

The people’s vote certainly matters in the primary election, when the constituents of the opposing party choose a candidate to run against the current president.

If there isn’t a public majority vote for a candidate, then our votes don’t decide the nominee; the delegates choose on the behalf of the people.

During the Presidential election, the people have the opportunity to vote again, but the popular vote does not directly decide the election. Instead, the people’s votes translate to the Electoral College, a body of officials that meets every four years with the purpose of electing the president and vice president. The number of electoral officials each state sends to the Electoral College depends on the state’s population.

About a month after the states’ popular vote is decided, electoral officials meet in Washington, D.C. to cast their votes. In all but two states — Maine and Nebraska — Electoral College officials cast their votes for whoever won the popular vote. However, in 2016, the concept of the rare-but-legal “faithless elector” came into play.

Federal law does not require electors to vote for whomever wins the popular vote, but the Supreme Court has ruled states can penalize faithless electors, who can then be removed or replaced with an elector who will stand by their oath.

No faithless elector has ever swayed an election.

If on Dec. 14, the day the Electoral College meets in 2020, neither candidate reaches the 270 Electoral College votes required for earning the presidency, members of the House of Representatives grouped by their home state will vote to decide who leads the U.S. for the next four years. A total of 50 votes will be cast, with the president needing a majority to win.

The Senate will cast votes for vice president.

So does your vote matter?

America is both a republic and a representative democracy. The people’s vote more strongly influences decisions at the local level, where voters have the chance to participate directly in democratic processes. When it comes to federal matters such as the presidential election, decisions are influenced more by the democratically elected representatives we have put in place.

Your vote counts, but does it actually matter? That’s for you to decide.

During the presidential election, your vote matters if you are living in a swing state.

Your vote matters in a state where you are a minority voter, as it is possible that a majority Democrat state could vote Republican, or vice versa. If this happened, then the minority votes cast in that state by electoral college officials would count in your favor.

So should you vote during the 2020 Presidential election? Yes, absolutely!

This election is one of the most important of our lifetime. Whether you believe your vote matters, or whether you live in a swing state, getting involved in politics through your vote does more than just influence elections; your vote influences your direct community.

By choosing to get involved, you are one more person who cares about a cause. You are one more person who will show up and stand up for what you believe. Your vote represents another voice in your community, another voice to your friends who will hear you speak for a presidential candidate who you believe is doing right by your values and morals. This public discourse is what allows for change to ensue.

Your vote influences your own growth. Question what you know and why you believe the things you believe. Be open to hearing others. You may find common ground with those whom you thought you did not agree. It is this kind of collective engagement in one’s community that ultimately paves the way toward the compromise of a brighter future.

That is why it’s so important to voice your thoughts while also listening to others who hold different ideas. Freedom of thought and expression represent the core of our democratic republic. Use it, and find empowerment through your vote this election year.